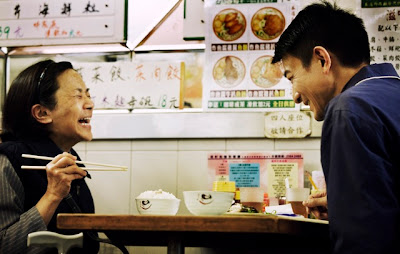 Winner of numerous awards from around the world, this is the true story of one of the film’s producers who ended up taking care of his nanny, Sister Peach (one of the film’s titles) after she has a stroke. It’s not your typical movie of the week, it’s actually how the woman strove to recover from her illness and live a somewhat independent life in an old folks home while her “son” watched over her.

Give the film a couple dozen points for not taking the road most traveled, in other words a movie of the week high drama tale, rather it’s more a slice of life closer to what many people actually experience with loved ones trying to live and get on as health fails but family bonds remain strong.

Buoyed by a strong performance by Andy Lau as the producer and an even stronger, yes it was right to give her every award under the sun performance by Deanie Ip as Sister Peach, this is two hours in the company of some really nice people. (Ip performance is the reason this is a MUST see at the festival)

On the other hand this film is two hours long. There isn’t anything wrong with the case being two hours wrong except there isn’t enough drama to support it. Sequences seem to just go on. Actually the best way I can describe it is that it’s a bit too much like life. It’s the sort of thing that makes a near great film a simply good one.

Don’t get me wrong, I like the film a great deal and I do recommend it, I’m just kind of at a loss as to why it’s as long as it is.

Alternately you’ll want to see this for Deanie Ip's stellar performance. Hell it’s not a performance, it’s a real person. It’s one of those performances that put 99.99% of recent Hollywood performances to shame. Yea it’s that good. Actually she’s so good that she makes this film one of the must see films of the NYAFF because who knows if this will get a US release.