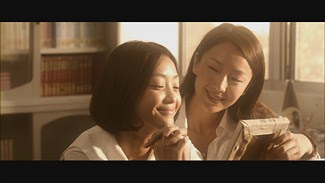 (Before I get into anything I have to say that this film is not a horror film, nor is it s a thriller. It's ultimately a nostalgic romantic drama with mysterious overtones)

Hybrid film concerning a mortician's make up artist who's music teacher/lover ends up on her table. As she prepares the body she reflects back on her relationship with deceased even as questions arise as to what really happened to her.

The sort of mix of genres that you simply don't get in Western films, Make Up is a tough nut to crack. Part lost love tale, part lesbian potboiler, part mystery part fantasy the film throws out all sort so things in an effort to try and tell a story the likes of which you've not really seen before. It also doesn't handle them very well.

Give the film points for trying (and give the New York Asian Festival points for bringing it here) this is film that tries to do something different. Unfortunately it doesn't really manage to handle anything but the past love particularly well. The mystery ultimately doesn't amount to anything, the modern brooding about dead lover is often over done and some what maudlin and the fantasy of the dead woman appearing to our heroine kind of just misses.

It's not a bad movie but it isn't really a particularly good one. In a weird way I think this might have worked had the pacing not been again to a slow funeral procession. Say what you will this film just goes on and one and bangs from pillar to post making you feel it's about something when in fact it's really not (I think the lesbian angle is simple there to make the film seem different.)

It's an okay film, and had the film been playing in the middle of the day where you could try it before, after or between other films I would say go for it, but as for it's one screening at 1030 on July 11th... I wouldn't make a special trip especially on a "school night"
Posted by Steve Kopian at June 29, 2012