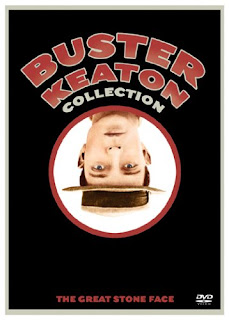 One of the Columbia shorts Buster Keaton made in the late 30's and early 40's has Keaton playing rich playboy Peter Hedley Lamar Jr (I wonder if Mel Brooks stole it from here?) who meets a nurse on her way to an army base when his car gets a flat. She wants nothing to do with him, prefering only men in uniform. While Keaton pursues his lady love, her friend chases Keaton.

Amusing, but far from the best Keaton suffers from being too close in stylings to the the Three Stooges. There is a hard edge to some of the comedy which doesn't really suit Keaton well, not to mention somw weird turns, what is the guy with the meat cleaver doing in this? It also doesn't help that several bits have Keaton simply being acted upon after he's knocked unconcious.

While not the best Keaton it does have several funny pieces such Keaton wrecking a room when he refuses to get undressed, the dance with pans on his feet, and the mayhem that results when the nurse with the hots for Keaton strings up his leg. What can I say I laughed.