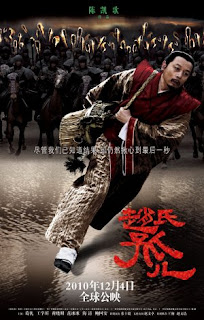 When a duke is over thrown in a coup, and all of his family is wiped out in the hopes of preventing the rightful bloodline from ever appearing again, a general manages to save a new born heir by sacrificing his own new born in it's place. How the repercussions of that one act plays out over the next fifteen years is the film.

That's not really the plot. The actual plot is a bit more complicated than I can explain simply, but that is enough to get you started.

I really like this film but at the same time I'm kind of annoyed with it.

What I love about the film is that it's a great looking film, with some kick ass battle scenes, some great ponderings about family, honor and revenge and a great cast. The film is an old school  historical epic that, once it's set in motion, pulls you in and drags you along to it's conclusion. Sure it's a bit soapy, which is something to be expected from a film based on a 13th century play, but it's also good drama.

The key problem with the film is that I was lost for much of the first half hour of the film.  The structure of the film bounces around through time and space a little bit too much and if I wasn't in a patient mood I probably would have turned the film off.  The film does settle down and the film does becoming infinitely more compelling once things are set in motion, but the uneven first half hour makes the film a really good film instead of a great one.

That said, if you want to see grand spectacle on the big screen, do make an effort to go see this film when is runs (just one time) at the NYAFF. Films don't get much more spectacular than this one.
Posted by Steve Kopian at June 29, 2012