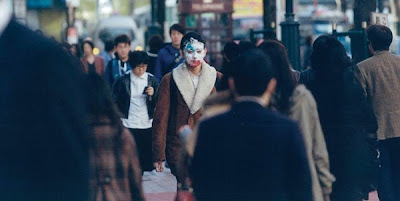 From director Toshiaki Toyoda who last made Blood of Rebirth a film that split the audiences that saw it at 2010's NYAFF comes Monsters Club, a retelling of the story of the Unibomber but reset in Japan and with some ghosts.

The film is essentially the story of a Ted Kaczynski character through several snow bound months when he begins to see ghosts and gods, and drift back toward civilization. Its a strange heady mix of ideas that is operating on several levels, including one that seems to infer a parallel with poet Kenji Miyazawa If you have no idea who Miyazawa is you're going to be among the vast majority of non-Japanese seeing this film (he was a wonderful poet who kind of chucked it all to live in the country where he farmed and taught). It's something which highlights a problem with the film, it's very referential to Japan and it's history and culture. Yes, you can follow the Unibomber stuff without difficulty (that's mostly him trying to come to terms with his past ans not blowing things up), but with the film is working on other levels you won't get what the film is getting at if you don't know what they are referring to.

Yea I know it's real weird for me to complain a film is too intelligent and thoughtful., but the film is. Its a film that struck me as a highly intelligent film that really only touches the head since almost everything discussed is an idea.

The film also is flawed by ghosts who look more like people wearing whip cream smeared all over their faces rather than anything supernatural.

It's not a bad film but it's not a particularly great one either. Little outside of talk happens, with the result that the film seems more to be telling us stuff rather than showing us or letting us decide.

While it's probably one of the most intelligent films of the year I don't thinkt it's much more than an interesting diversion.

(In all fairness Mondocurry LOVES this movie. He is over the moon about it. He will also be writing it up...and having talked to him about his piece you will want to come back for that.)
Posted by Steve Kopian at June 26, 2012