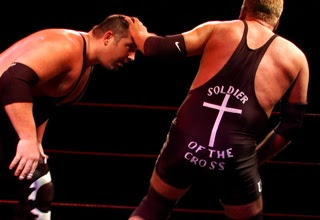 While this isn't going to make my best of the year list, on the other hand I suspect that this film's unexpected pleasure will be remembered when so many other films have fallen by the wayside.

Jae Ho Chang and Tara Autovino went to Georgia to film what they thought was a ridiculous expression of faith, a mixture of professional wresting and preaching. What they got was a portrait of three men who aren't as ridiculous as the way they choose to spread their faith. Its a portrait that worms its way into your heart and gently breaks it.

Christian Wrestling is a barnstorming group of guys who combine pro wrestling moves with heartfelt preaching of the word of god. They are not connected to any church and do what they do out of their own desire to preach. The cost of the shows is purely donation based- and based on the turn outs the donations are sparce, to say the least. Actually thigs are bad not only for the UCW but also the men who wrestle in it.

Rob Adonis is the brains behind Ultimate Christian Wrestling. He credits God for putting the idea in his head to combine his love of wrestling and of the almighty.

Justin Dirt is a young man in his early twenties who lives with Rob. Justin dropped out of high school and then went back to school to get his diploma. He love wrestling but knows that he's going to have to find something to get his life back on track

Billy Jack is the UCW champion. He's a sweet guy who hoped that after high school to become a pro wrestler, but it never happened and he instead works doing home repairs. To say that he's having a tough time is an understatement.

If you're looking for wrestling look elsewhere. While the film does have bits of some matches, the film is really more concerned with the men.

The film also shows us some of the theatrics in corporated into the matches. During one match Jesus takes the place of one wrestler and takes the blows of his enemies. In other matches Jesus appears and teaches one wrestler or another a lesson about faith. Weird it is. But its also heartfelt, especially when compared to the preaching done in a church that Justin takes his agnostic brother to.

The film is not preachy...either pro or anti. The film is simply a portrait of three guys that you'll come to like.

I really liked this film. It up ended my expectations and took me somewhere special. If you can let go of your pre-concieved notions of this is going to be silly, I recommend you give this a shot. 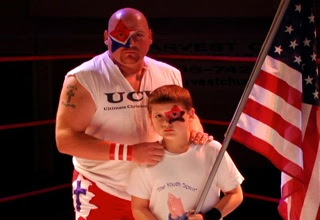