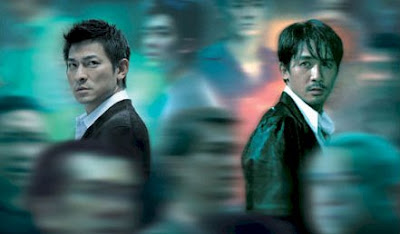 This is the story of a cop who goes deep undercover and joins the triads. It's also the story of a gang member who goes undercover as a cop. After years in deep deep cover each discovers the existence of the other sending the pair and their organizations on a collision course.

You seen this right?

No, seeing the over rated Oscar winning film The Departed doesn't count.

Come on you haven't seen this?

Why haven't you seen this?

This is the real deal. This is one of those films that comes out of Asia every couple of years and changes everything in it's wake. This is a perfect paced film running almost an hour shorter than it's bloated remake. It's a film that has style to burn.

Actually the film's flaw is that it has so much style that it pretty much overwhelms the intricate plot. I remember writing a review not long after`the film came out where I talked about how the film's style drives so much of the film during the first hour that when the plot takes over- during a tense roof top confrontation- the film feels like it's lost something. It's only on a second viewing that you realize that bump isn't as bad as you thought and that it's more like the release of a roller coaster car from the lifting chain at the top of the first hill. After all if the film didn't work the revelations toward`the end wouldn't be so upsetting. Trust me the end almost always brings an "Oh Shit" from everyone who's seen it.

I love this film. Its neat and clean and economical. Don't get me wrong I like The Departed, but I don't love it. Its too big a film with too many characters. It drones on and on and I was 90 minutes in wondering when it was all going to end since it just went on and on. Infernal Affairs on the other hand moves like the wind. There are only enough characters as the story needs.

If you want an example of how good the film is, watch one of the opening scenes with the moles on the inside and the outside of a big meeting trying to warn their real bosses about what is going down- that they suddenly realize that there is a mole in the other side. The one scene has more tension than almost any other American crime film of the last ten years. Its a masterpiece of film making.

Has time and the fact that the film has been copied lessened its impact? Perhaps slightly, on the other hand I semi-recently saw this film again and I found it still rocks. It's still a film that people are copying. Think I'm kidding? I'm not The New York Asian Film Festival is having a panel discussion about the film and it's impact.

If you're in the New York City area next week make an effort and go see this it at the film festival. 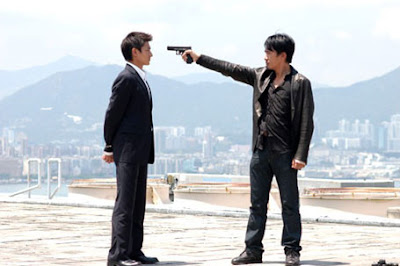