Omer the Tourist in Star Trek- The Turkish Star Trek 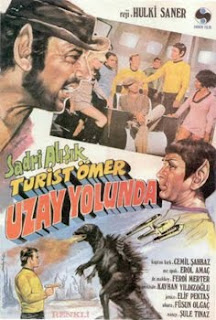 The advantage to having seen every episode of the original Star Trek series is that when some one lifts the plot of three or four of the episodes and turns them into a Turkish comedy it becomes very easy to follow. For those without a running knowledge of episode titles this mainly the salt monster episode redone as a feature with the inclusion of a few other episodes thrown in for good measure. However this is not just a straight Star Trek movie, rather its part of a series of comedies staring a character named Omer. This makes for a strange mix of wild comedy and straight science fiction drama.

Amazingly its nowhere near as bad as you might think. Actually its quite good. The Star Trek lifts come off more as a well done fan film than any sort of bad movie. Personally I wish this was translated into English so that I could have some idea what was being said during the comedic verbal exchanges between Omer and Spock.I get and can laugh at the physical humor but since I can't speak the language the verbal sparring is lost.

It you're a Trek fan see this movie. If you're a science fiction fan give it a shot. I think you'll be pleasantly surprised.

Note to those who say this is a bad movie with bad acting and bad special effects- you have to admit that the original series, as charming and as nostalgic as we feel towards it, is about the same quality as this film on every level. You can't honestly think that the original episodes are more than marginally superior to this film, especially in the acting.
Posted by Steve Kopian at June 21, 2012