Zatoichi Meets the One Armed Swordsman (1971) 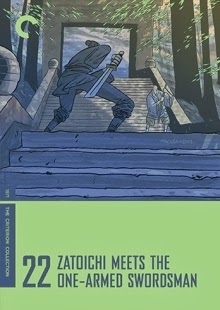 Steve here- this is a tag team post. Its taken a large number of us here at Unseen to get this post done. It went through several hands before Hubert started to put it together,but circumstance required that I finish it. Actually the final draft is all mine, largely because I can't write to Hubert's level and i couldn't blend the words seamlessly.

A Hong Kong Japanese co production this film brings together Shintaro Katsu's Zatoichi with a variation of Jimmy Wang Yu's  One Armed Swordsman. The One Armed Swordsman was a character that Wang Yu would play in one form or another for much of his career. The original character appeared in a two or three Shaw Brothers films before Wang Yu took it on the road. The character was in many ways similar to Zatoichi in popularity.

The collision of the two characters is set in motion when Wang Kang (Yu) meets a Chinese couple and their son. They offer to take Kang where he wants to go because they know the way and I assume speak Japanese which he doesn't. While on the road the group is forced to step off the road for a tribute train going by. When the boy gets up to chase his kite one of the swordsman in the front attempts to kill the boy, however his mother takes the blow. All hell breaks loose and Kang steps in to fight the samurai. Kang escapes and the remaining samurai kill all (most) of the witnesses.  Zatoichi finds the son mourning his father and takes him away.

What follows is a dance as Zatoichi and Wang Kang crisscross paths repeatedly with Wang on the run with the boy and Ichi trying to sort it all out- and ending up with a price on his head for his efforts.

The notes in the Criterion box set mention that until the film never received an official home video release anywhere in the world until after 2000. I'm guessing this is the reason that the film has so many legends and stories told about it. The best known tale is that there were two versions of the film one for Hong Kong and one for Japan. The notes say that the only version that exists is the one in the set, and I'm guessing that's probably true. Alternate versions of popular films such as this tend to show up somewhere like home video. I've never run across anyone who has ever said that they've actually seen it, which leads me to believe that IMDB and the stories about it are wrong about an alternate cut - I mean where would you put a second fight between Kang and the priest?. (If you've seen it let me know, more importantly if you know where I can get a copy let me know)

The talk of an alternate version reminds me of the talk that there was an alternate cut of King Kong vs Godzilla where Godzilla wins. While the ending is essentially the same in both versions, there are differences (beyond the American actors) with the order of events different, more time on  Kong island and a few other changes. I'm guessing that no one has undertaken a release of the Japanese version in the US is that the brown face portrayal of the native on Kong Island is kind of offensive in today's world.

For me the film is a mixed affair. While it's a solid entry in the series with lots of the Zatoichi riffs at work from an uneasy alliance that goes side ways, bad guys out to cover their asses causing more trouble, a child in need and of course a person one would think being above reproach turning out to be the bad guy. I like that a running line through the film is about the lack of communication between the two heroes who end up fighting each other needlessly because  they simply can't talk to each other.

The film gets into trouble when Japanese and Hong action styles collide. The trouble is that the wu xia wire work of Wang Kang feels completely out of place in the realistic world of Zatoichi. The leaping seems silly, or at least in the context of Zatoichi's world. He does these great leaps up and over people and it all feels wrong. Also seeming kind of wrong is the short sword he fights which kind of makes you feel that he should be getting his butt kicked.

What I do like is the final confrontation between the two stars. Its a neatly filmed little spaghetti western style shoot out done with swords instead of guns. (Which reminds me in the same  year as this film was made, over in Italy actor director producer Tony Anthony turned out his western riff on the character BLIND MAN-a review will run Wednesday)

As films go this is a solid but not particularly taxing entry in the series. Definitely worth seeing, especially if you don't mind the mashing up of film styles.