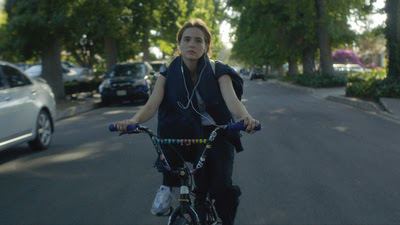 Flower is the story of 17 year old Erica and her friends who seduce older men and then basically threatens to blackmail them unless they give them money. They consider themselves vigilantes to the wrong. Her mom acts like her best friend, and her dad is in jail. Everything changes when her mom invites her boyfriend and her boyfriend's son, who is fresh out of rehab, to move in with them. What begins is an unlikely friendship. Erica's new brother- in- law also has a connection to the hot older guy the girls drool over at the bowling alley. What turns into fun and games winds up going too far.

I didn't enjoy the very weird ending at all though. It just seemed a bit ridiculous to me. It's definitely a film I'm still thinking about. The cast was great, I loved Zoey Deuch, Kathryn Hahn, Joey Morgan and Adam Scott.
Posted by Steve Kopian at April 22, 2017