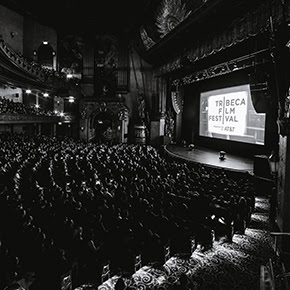 Not only is the festival screening dozens of films they will be having talks, concerts, TV premieres, VR delights and this year a whole computer gaming sidebar. Several people I know are delighted with that turn of events.

Scaling back on the number of films and events this year’s Tribeca is a lean mean fighting machine. The films are surprisingly good, with so far only one film that I can’t recommend. I know the PR people at Tribeca just swallowed their tongues when they read that, but as anyone who has really attended the festival (i.e. seen more than a movie or two in a single festival) knows the festival programming has been scattershot with some films making you wonder what the programmers were thinking. This year the feeling from the press trenches is that the scatter shot nature is gone and they simply programmed films that deserved to be on the big stage. I’ve been told that there were numerous heated arguments because the number of slots were so greatly reduced.

As this posts the Unseen family has seen around 35 films and we are planning on seeing about the same number again. We’ve seen a good number of films that have delighted us and one film we feel is in the running for the Oscar.

This is my eighth year of Tribeca (not including two years where I just went to the family festival) and I’m like a kid making his first trip to Disney The movies are the excuse but the real reason I do this is the people. . I’m thrilled with what I’ve seen and giddy for the next thing. Already I’ve met a some new people (Ben ) and I’ve reconnected with some others (Sam,Oron). And I’m looking forward to meeting more people. If you do this right you’ll have not only memories of great films but great friends as well.

And if things are sold out keep checking back or try the rush line- because tickets more often than not are released close to curtain time. You just have to be persistent

With close to 100 features and several dozen shorts there is probably a good chance you may not have any idea what to see next to that end I’ve put together a brief list of must sees based on our early viewing.

LA92 is one of the best films of the year and the first film I think is in the running for the Oscars. The film is as good as documentary filmmaking gets. A gut punch that leaves you understanding the why and hows things went so wrong. It’s a sobering wakeup call about what may happen again if we don’t get it together. (And  you must see this on the big screen)

King of Peking is a movie lovers delight. The story of a father and son, their love of movies and the things they do to try and stay together. A joyous celebration of father, sons and movies itsa must see. I've heard it compared to Cinema Paradiso, and I know why, but in fairness while it echoes that film this is gloriously it's own story.

1000 Junkies maybe the great hidden gem of the fest. This come from nowhere comedy is story of three junkies trying to score. It shouldn’t be as funny and moving as it is, but it left everyone I know saying that the film is a must see.

The Departure is one of the best films at Tribeca. A wonderful mediation on life, death and what is important in life. It is a Buddhist mediation that is will move you.

Holy Air is a very funny look at the commercialization of the Holy Land and the struggle to get ahead. Pure joy

The Wedding Plan is not a typical romcom. It’s a film less about the romance so much as just trying to find a place in the world and what god wants for us. This film gets better the more I think about it.

I’m going to include November in my must see list despite having some reservations. The film is a wild and crazy fairy tale set in a world where the devil, werewolves and other strange creatures are real. It’s very much an art film that is going to work for some audience and not for others. That’s not a knock on the film only a warning that this isn’t for everyone. That said it’s film with truly magical sequences which will delight the adventurous film goer.

River Below is an excellent look at efforts to save the pink river dolphins in the Amazon. A twisty examination at conservation efforts it asks what would you do to save the thing you love? A must see- though I have to warn you the film can be quite disturbing in it’s imagery.

The Family I Had is a gut punch. A deeply troubling look at a shattered family, what broke them and where they are going. This is twisted tale that will leave you sitting in your seat even after the end credits roll as you wait for the next thing to happen. The less you know the more you will be shocked.

Ariela is taking the lead review on For Ahkeem but I wanted to put it on your radar. Portrait of a girl who is sent to a school for troubled kids after fighting one time too many, this is a look at what it's like to be black, poor and incredibly intelligent. I wasn't sure what I was going to think but ended up thinking of it as an early favorite of the festival.

Ariela loved Ice Mother calling it her favorite film of the festival so far. The portrait of an older woman who begins to find her own life is a wonderfully atypical drama that will delight you.

I was sick when it ran pre-fest but my spies have told me that the Burt Reynolds headed film Dog Years is one of the best of the fest. I'm told it left everyone in the screening sobbing.

I also want to say that those of you who saw Manifesto at the Park Avenue Armory or at one of the places where it played as an installation around the globe, you do need to see the feature version. The streamlining and rearrangement of the shorts into a feature make it something else entirely and equally as magical, if not more so.

And if you see me and my monster bag wandering the halls or in a theater- come and say hi.
Posted by Steve Kopian at April 16, 2017