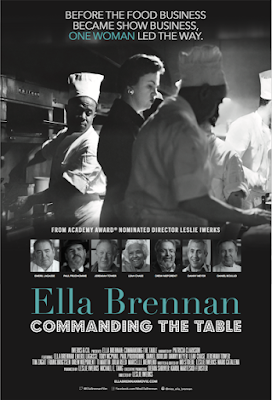 Leslie Iwerks portrait of Ella Brennan is going to make you're mouth water. This is a history of not only Brennan, her family and their restaurants but also the history of food in New Orleans and ultimately America

What can I say Ella Brennan and her family changed how America eats. The woman who gave Paul Prudhomme, Emeril Lagasse, Tory McPhail and their start also. came up with methods of serving have slowly been creeping into restaurants around the country. Its the portrait of  a woman who knew what she wanted and managed to get it and more, by having an excellent palate and by working with a wonderful staff.

You'll forgive my lack of description or even the lack of criticism but some films just kind of transcend that. You know those special films you run across where you really can't say much about them other than tell everyone you know that they should be running out and seeing them.ELLA BRENNAN is one of those films.  Its a really good film about an intriguing woman that is going to make you want to go out and go to a really good restaurant. Half an hour in I wanted to make a trip to New Orleans to go to one of her restaurants- and I'm not a foodie- I don't go to eat for the hell of it

I don't know what else to say other than see it.

The film plays on Netflix starting May 1 and will play theatrically later in the month.
Posted by Steve Kopian at April 30, 2017