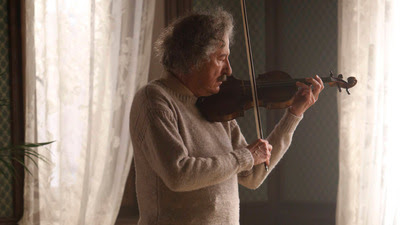 Geoffrey Rush plays Albert Einstein in new TV series running on National Geographic. Initially set in the 1920's but untethered in time the series looks at Einstein's life and a achievements.

Tribeca ran the first episode and then had a talk with producer Brian Grazer, director Ron Howard, actress Emily Watson and Geoffrey Rush. Sadly I did not see the talk which I'm guessing was spectacular. I simply saw the first episode.

Somethings should not be blown up to the size of a movie screen. Watching the first episode I was struck by the sensation that I would have liked it better on TV where it didn't have pretentions of being something more. That is and isn't a knock. As TV series goes the film...episode...plays like a TV show. There are no breaks for TV but the film follows TV series constructions. Its a set up for something more and it ends at a suitable break. It also has the smaller scale feel that makes it look wrong on the big screen.

No. But at the same time outside of Rush's performance there wasn't a hell of a lot to make me want to come back for the remaining nine episodes.

The series starts airing on April 25th.
Posted by Steve Kopian at April 22, 2017