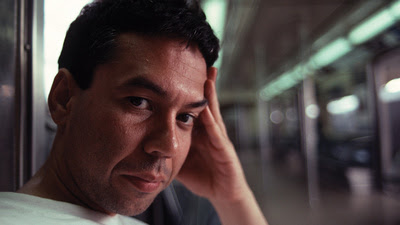 I don't really have the words to properly express what I think of GILBERT, a funny touching and deeply moving portrait of not only comedian Gilbert Gottfried but also his family as well. Quite simply the film upends expectations and makes you see Gilbert in a whole new light.

It was a given that the film was not going to be a portrait of the manic soul we see on TV, but at the same time the film is something else instead. The Gilbert Gottfried we see is an unexpected one- not only is he a family man but he is also a man of quiet reflection. Here is a man who goes through his day and very frequently can found quietly sitting and just being. He is a man who is taking it all in. Watching him simply sitting he is so quiet that he almost disappear from view. This is not what you'd expect from a man who on TV or in the movies never seems to shut up.

Seeing the off stage Gilbert is a revelation. I a weird way I feel a kinship with him.With his awkwardness and uncertainty he seems to be very much like all of us.Many people reflect that before he met his wife the awkwardness was even more pronounced. I can't imagine it.

What struck me most is that director Neil Berkeley gives the film not only room for Gilbert but also his wife and children as well as his sisters. It is a brilliant move since it is through their eyes that we get who Gilbert really is. We see it through their interaction, their stories but also through the home video and photographs.Through the stories and images we see and learn more than if the film had just focused on Gilbert himself. I found that watching Gilbert and his mom brought a tear to my eye. It was simply how he moved with her, in particular as he helped her walk into a building, which was so loving and so full of humanity my heart melted.

At times there is a sadness to it all. Seeing Gilbert hoarding things like soap is funny but it is also sad for it gives a sense of a man who thinks it will all go away. Equally sad are the shots of Gilbert on the bus. There is nothing wrong with taking the bus but at the same time it is a bit humbling because we see that he is one of us after all.

Of course the film has it's manic performance moments.We watch as he tells uncomfortable jokes about Mackenzie Phillips and his daughter, something that bothers Dara, Gilbert's wife.She knows not to put limits on her husband who will take it as a challenge and push things even further.

And then there are the surreal things that happen to Gilbert, such as staying in a hotel where there is a military re-enactors convention going on. It is the very definition of surreal as he ends up posing with a bunch of Nazis.

But then things turn as Gilbert sets up a table out side of a theater to sell his books and DVDs and generally sell his merch for a couple extra bucks.

Several days after seeing the film I find I am still processing it. I have written several reviews which I have tossed out.Given my druthers I find that I would have waited until I had seen the film several more times to really grasp everything I was seeing. Sadly the need to be timely for the Tribeca Film Festival has me posting a review that may not be as note perfect as I'd have liked.

Ultimately GILBERT is a brilliant film.It is a masterpiece and the best sort of documentary in that it shows us a subject that we thought we knew and instead shows us it not only in a new light but reveals it to be something else entirely. The Gilbert Gottfried that emerges from the film is one that is going to surprise both his fans and enemies.

GILBERT is one of the best and biggest surprises at this year's Tribeca and a must see.
Posted by Steve Kopian at April 23, 2017