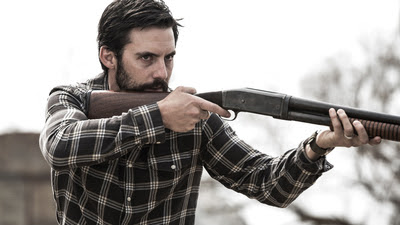 The only film at Tribeca that could be called a Midnight film (the section it is part of) DEVIL'S GATE is a grand old monster on the loose story (of a sort) that is worth a bucket of popcorn.

The plot of the film has an FBI agent called to a small town in order to investigate the  disappearance of woman and her son. They were supposed to have gone to her sisters house but they never arrived. Hooking up with a sheriff's deputy they show up at the woman's house to find that there are deadly traps in the yard and the doors and windows are barricaded. Once the husband appears things begin to escalate and it isn't long before he's in handcuffs and the officers are wondering what is going on and what is the thing in the basement.

To be honest I like this film  but I'll be the first to admit the film has problems. Well made and probably wildly over produced film moves like a frieght train for much of it's running time. If you can click into it's weird mind set it's a great deal of fun

The problem is the film has lots of problems. Full of WTF moments and odd twists the film really doesn't make sense. Part of the problem is the time frame doesn't add up. Things happen either too quickly or too slowly depending on the need of the  story. The house had all it's protections put into place in a couple of days despite it all looking weathered. The denouncement makes no sense and leaves you asking lots of questions. Even I who was long for the ride can't over look them any more than I can over look the flaws of classic bad films.

I like the film and recommend it if you like flawed weird ass monster films.
Posted by Steve Kopian at April 29, 2017