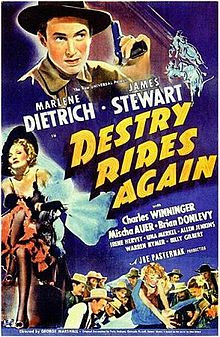 Bad guy Brian Donleavy is tricking all the ranchers in the surrounding town into selling their land to him. He then is evicting the families and charging the cattleman a fortune to cross the land. Donleavy thinks he has the town completely under his thumb and after his men kill the sheriff he has the town drunk appointed to the position. However the joke is on Donleavy since the new sheriff calls for Tom Destry Junior (Jimmy Stewart), the son of an earlier sheriff and a man cleaned up several other towns to come be his deputy. Everyone is heart broken when Destry arrives and seems to be a milquetoast who refuses to use his guns. What everyone doesn’t realize is they are under estimating the lawman who is more than capable of taking care of himself.

Legendary film pairs Jimmy Stewart and Marlene Dietrich is a perfect mix of comedy and action.There is a wonderful tension between the two of them and you can completely understand how the pair would crash into each other. You also understand how he could change her simply by respecting her.

This is the film that introduced the song The Boys in the Backroom.which became a Dietrich standard Which she sings in a legendary sequence walking along the bar.

I truly love this film and I find that of when it shows u on Encore Western's I'm watching it over and over again.

As much as I love the film I have problems with the end of the film. Part of the trouble is that there is a point where the pacing goes off the rails and it races to the end. The other problem is that the ending bumps around oddly. First Destry, who refused to even really touch a gun suddenly grabs his guns at a certain point. It’s understandable to a degree but it is also out of character. The other problem is that because the production code was in effect there was no way Stewart could end up with Deitrich so in a hokey ending they kill her off and have him suddenly make time with a nice girl as the titles roll. It’s okay but ultimately feels wrong.

Reservations about the ending aside I highly recommend this film
Posted by Steve Kopian at April 16, 2017