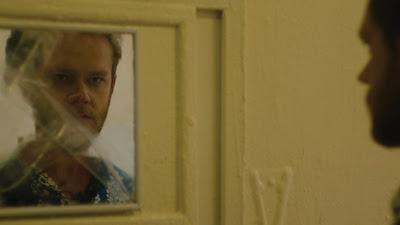 I hate this film.

While it isn't a film that fills me with unbridled loathing, I despise that the film wasted 100 minutes by doing absolutely nothing for almost the entire time.

How the hell did this get picked up by Tribeca?

In a men's bathroom in Hawaii  Joseph Burns writes something on a piece of paper and then leaves. Back home Joe and his wife get back into the groove, he works on his political documentary and she works as a nurse. They are expecting their first child, a fact that has rattled them both. Over the net few weeks Joe deteriorates mentally. Constantly checking on the name he wrote in the bathroom he is haunted by the figure of a Japanese tourist with blood on his head. Taken to wandering around at night he almost beats up or kills any number of people. Fearing he is breaking down he tells his wife about her fears but she says it will be okay. Meanwhile the Hawaii police are calling to ask the couple some questions. Finally he breaks and beats a wino to death. After staying out for a day or two he comes home and kills his wife. As he cooks dinner his sister in law shows up with her baby and gives it to Joe- he and his wife were to watch the child for the weekend. The end.

That sounds like its exciting but the vast majority of the film is Joe wandering round not doing anything or watching public domain clips that may or may not have anything to do with the film he is making. Its as dull as dirt. People around me were snoring. Seriously he wanders around the city doing nothing...no wait he smokes a lot of cigarettes...but ultimately he wanders around and glares.

The film is supposed to be a portrait of a man breaking apart and we are supposed wonder when he's going to break. The problem is that Joe says almost nothing to indicate his mental state. Hell, he says almost nothing at all. The entire clue to his breaking  apart is he puts the hood of his sweatshirt up (except for the one time he gets really pissed and takes it off - but that doesn't work since without its magic power he gets his ass kicked)

When something really happens that might be of interest- his killing the homeless man or his wife- it's largely off screen. Additionally when the film ends with the arrival of the baby the film ends. While I am not suggesting that I would want to see a baby killed, I am suggesting that the film finally has something interesting happen only to roll the credits. While we could guess what happen, we could be wrong since the entire crowd thought the film was going to have something happen in the previous 95 minutes.

Of course the film has other problems.  The biggest problem is that Joe and his wife don't fit together. Why are they together? There is no sense of them being a couple. Worse they don't even seem to be in the same universe. Why she puts up with his crap is beyond me because they don't seem remotely connected- like every other couple in the film does.

And there are plot points that make no sense. Why does she allow his refusal to work?  How did they afford a vacation when Joe gave up his cellphone to cut costs? Doesn't she check their answering machine? Why isn't she worried when her husband is gone for over a day? Of course there are more bits that make son sense  but those are the ones that sprung to mind.

Nothing happens- and when it does it doesn't make any sense.

What a waste of my time.

Email ThisBlogThis!Share to TwitterShare to FacebookShare to Pinterest
Labels: not worth the effort, psychological thriller, tribeca 2017