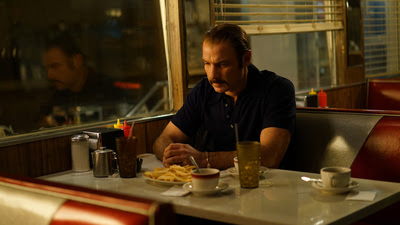 Liev Schrieber  stars as Chuck Wepner, the Bayonne Bleeder who was the inspiration for Rocky Balboa.

Charting the course of Wepner's life as it connects to the Rocky films the film shows the ups and downs of his life and the struggles he had within himself to try and find peace.

An enjoyable film CHUCK is a nice portrait of a nice guy. The film is less concerned with facts the film is more a psychological portrait of the man. Those looking for the whole story will be disappointed since things like Wepner's eventual lawsuit concerning Rocky is never touched on. Also some details are rearranged or changed. Ah the joys of the movies biopics.

For me,  long time boxing fan, I was entertained. It was more than I had hoped for.

To be honest the film has the feel of a film that was supposed to be longer. Plot threads come and go. Details seem to be missing. Its not fatal but it hurts.

Reservations aside definitely worth a look see.
Posted by Steve Kopian at April 29, 2017