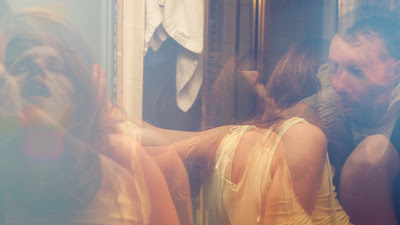 Zefrey Throwell and Josephine Decker's look at their relationship is as pretentious a film as I've seen at Tribeca this year. A self indulgent, self important piece of trash this film would be something if they chopped an hour of this away and set the rest on fire.

Beginning with the couple having the first of several sexual encounters the film drifts through the curse (and course) of their relationship as we watch sequences that seem to be a mix of staged scenes and real moments. The film follows them through time as the relationship eventually implodes and the pair then sits in a room and discusses what when wrong while editing footage.

It should be said the best stuff is the editing stuff with the couple looking back. There is something about those moments that really works and we get a sense of the two directors as something other than annoying hipsters. The second best is some of the trippy imagery, landscapes turned side ways and weird lighting. There are these wonderful wordless shots that delight.

Unfortunately the rest of the film, well over an hour of material that is unbearable. Why anyone thought we would have any interest in these two people is beyond me.Decker, outside of the editing room, comes off whiney and Throwell is just an asshole. Why the hell were they together and why are they still talking?  And who thought we'd  want to see them screwing---over and over again? What is this the inde hipster version of 9 SONGS? Than movie was bad, though not as bad as this.

To be honest I'm not sure if this is docufiction or straight documentary. The film wasn't self shot, camera crews filmed everything and but I'm not sure who was doing it. It makes me wonder if the couple redid some of this or are just so fucking narcissistic that they had some one film their lives. I really don't want to know- but I'm curious.

Looking around the auditorium during the critics screening- hey I was looking for something to actually interesting to pass the time- I noticed lots of people sleeping. Frankly I've never seen so many people asleep at a screening. (I also spent a lot of time wondering who all the people were who were walking out)

Do you need to know this? No

Is it proper to report this? No, but then again it's not proper to put your home movies and sex tapes on the big screen and ask people to actually pay to see it.

I hate this movie

Email ThisBlogThis!Share to TwitterShare to FacebookShare to Pinterest
Labels: docufiction, not worth the effort, nyc, tribeca 2017