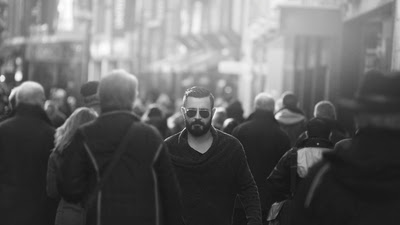 Portrait of Iranian singer Shahin Najafi who had a fatwa placed on his head in 2012 for one his songs which poked fun at one of the leaders of Iran. The film follows Shahin as he tries to survive with a price on his head and as real world events such as attacks in Paris complicate what he is trying to do. We watch as writes, hangs out and performs.

Good but unremarkable documentary is a verite look at a man on the run. Its a tough life where he always has to be on guard, and he is unable to ever go home, even for his mothers funeral since it is believed hit squads, or just greedy people are out to get him.

While I like the film, I don't love it. There are a couple of issues with it that keep it from being something I love.

First the telling is rather jumbled. The film kind of assumes you know who Shahin is. I had no clue and it wasn't until I was a good way in that I had pieced together more than cursory details. Sequences start and run randomly. We never  fully see or hear an entire song. While I like that we kind of have to piece things together I don't like that outside of the fear there isn't a hell of a lot of emotion coming off the screen.

Frankly I know where the problems came from and that is the director.Til Shauder. Its clear that Shauder knows his subject well but he didn't put it all on the screen. Reading the press notes after the fact I realized that things like Shahin's age just aren't in the film  The official synopsis quotes Shahin as refusing to stay locked away like Salman Rushdie because he is a performer but it's not in the film. There is a story here it just needs a better editor.

Unevenness aside WHEN GOD SLEEPS is worth a look for fans, for all others perhaps.
Posted by Steve Kopian at April 21, 2017