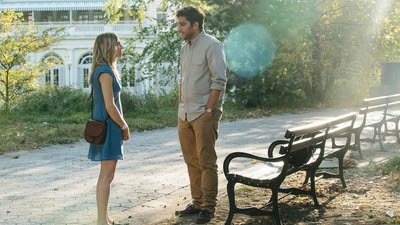 The Boy Downstairs stars Zosia Mamet who is from Girls, plays Diana, and Matthew Shear who I was unfamiliar with but who is adorkable(think I made up that word but I like it), plays Ben.

Diana is recently back in New York City after spending some time in London. She is looking for an apartment and finds the perfect one with the perfect roommate. Perfect until she finds out that her ex boyfriend Ben, who she broke up with before moving to London, is her downstairs neighbor.

They have an awkward first encounter where she tells Ben she wants to be friends, but he clearly has no interest. What continues is a series of awkward moments. The film goes back and forth between the past and present. The past showing us what their relationship was like. The film deals with thinking about their past, present and future relationship. As someone who just went through some heartache myself, I was able to relate to this film and was glad I had tissues nearby. This film isn't the most unique, but I thought it was sweet. I'd say see it when it comes out on Netflix or whatnot.
Posted by Steve Kopian at April 23, 2017