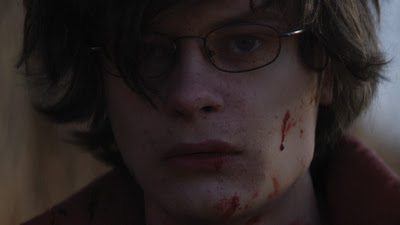 Dark moody film about two friends in love with the same girl who find their friendship and lives unraveling in the face of a tragic accident is not for all tastes.

Set two decades ago and looking like a film made after repeated viewings of Donnie Darko this film, about lost innocence and the messed up things we do to ourselves has style to burn. A gorgeous looking film the images instantly evoke a mood and are pretty much the sort of thing that you'd want to hang on the wall. Clearly director Kevin Philips knows how to shoot a film and assemble it for maximum effect.

The trouble is script isn't quite as clever as it should be and it begins to unravel if you look to closely. I was so bothered by the script that I ended up taking copious notes about all the odd things contained in the dialog. From lines that sound really cool to the point of being quotable, but which serve no real purpose, to Josh and Zach saying things to each other that no life long friends would ever say to each other, to Josh's lines often coming in from another movie, the dialog just never felt real. (Josh's character never worked for me since he felt like a construct for effect not a person)

Actually much of the film doesn't feel real as is illustrated by a group of friends going to the local bridge which is closed. The discussion is framed to suggest its been closed for years or something they just stumbled upon- but since it's in their town we are left to wonder why don't they know the reason. More to the point if it was closed for any length of time why is there just a couple of signs? It makes no sense. There are several other moments like this, where things are referenced that the characters should know about but don't seem to simply because it would change the film or prevent a moment of "deep meaning".

And while I shouldn't have been dwelling on odd moments like that there was nothing in the scenes prior to draw me into the film.