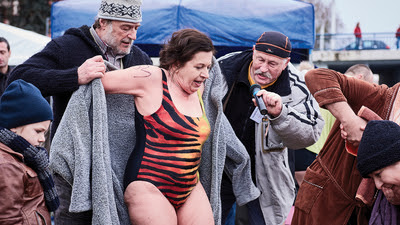 Off beat by American film standards, ICE MOTHER is a really good change of pace about a grandmother whose life is in a bit of turmoil but who finds hope after rescuing a man who was swimming in frigid waters.

Impossible to predict where this is going film is an interesting look at a selfish family and a woman who tries to find her own place. As Hana's sons bicker she feels as though she has no purpose in life. One son wants to hide his antique books in her home, the other wants him to move closer so she can be a defacto made and babysitter. She chafes at both options and when she rescues light hearted Brona things change, even for her withdrawn grandson.

This is a film about trying to find not only what you want but where you belong. Twist follows twist and each moment of happiness brings new complications- the mere idea that she would have friends outside the family bring death stares from her children. By the end of the film Hana is buffeted but still goes on.

I really like this film a great deal. Part of the joy comes from it simply being so different than anything else at Tribeca. Mostly though this i just good time with good people. While I think there is a bit too much of a thread of cruelty through the film, I'm okay with it simply because it's probably closer to reality than anything Hollywood would have done even if it feels forced at times.

One of the recommended films at Tribeca.