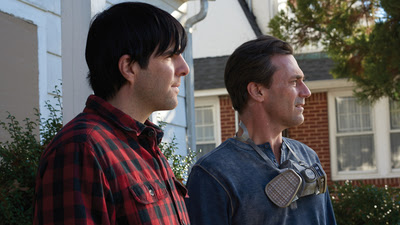 The film is about three people; Jenny Slate (Emily), who is a therapist, Zachary Quinto, (Josh) her patient, and Jon Hamm, his brother(Craig). Josh who we very quickly see is troubled, starts seeing Emily to get help. He tells her he has a famous actor brother named Craig, who is in town, but has no way of contacting him. He says he hasn't seen him in 15 years.

We soon find out he has schizophrenia. Everyone is Craig to Josh, a homeless woman, a police offer. He says every time he sees Craig he is a different character and tells him its his best work. Josh also mentions to Emily that he was diagnosed with a disease years ago, but we never find out what that disease is. Is it his schizophrenia? We don't know if this is what he means.

One day actor Craig appears at Emily's house to ask if she is treating his brother. He is glad that she is, and the two of them very quickly wind up sleeping together. In the meantime, Josh meets a really cute girl and they start spending time together. This part of this film was very sweet and I thought this might be a turning point for Josh. But at one point I started to wonder, is she real? We never find out. Why haven't the brothers seen each other in so many years? We never find out. Craig doesn't want to see Josh, he says he pays his bills and he tells Emily that he's very disturbed. Is that why he hasn't seen him in so long? Again, we don't find out. I kept wanting and hoping for more from this film, more about the brothers, more about Josh's troubles, but never got it. This film premise seemed hopeful, but instead was pretty bland and not memorable.