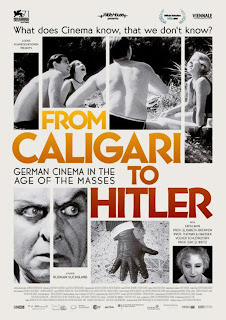 Based on the classic book on cinema, as well as being about the book itself, FROM CALIGARI TO HITLER is a look at how the rise of the German film industry parallelled and forewarned the rise of Hitler.

Siegfried Kracauer's titled tome was for many decades the book on the German film industry pre- World War 2. Back in the early 1980's I was required to read the book for a film history class. While the book was required the professor took some potshots at some of the things that were in the book. I don't remember what he found to be a problem but I do remember that he had issues with how neatly some things were linked  Hindsight is everything and looking back makes it so easy to see the connections between everything- connections that may or may not be there. I know my professor said that some of the links and connections weren't there.

For better or worse the book has always haunted me. I have somewhere in my collection an old copy of it, that I haven't read in decades but which I will look at admiringly now and again on the self.

Rüdiger Suchsland's film uses the book as a launching point to look at cinema and the history of Germany. In someways more an essay than a straight on documentary, several passages seem to be more personal reflection than straight on reporting. The film is also a kind of emersion tank of film from the period with lots of clips, and lots of commentary about what we are seeing. The film isn't so much teaching us things as getting us into a certain headspace in order to understand what we are seeing.

I think this is a super film. I like that the film is very much a German film. This is not a film that tries to be anything other than a German filmmaker looking back at his country's cinema. Its something that puts the whole affair into a different light. There is an assumption that you know certain things or can see certain points of view. If you can't click in you'll be slightly lost as it goes on.

Watching the film for the first time I felt a bit over whelmed. I don't think anyone watching it who didn't grow up watching the whole spectrum of German cinema wouldn't be. There is simply too much to take in. And I don't mean that from the narration of commentary point of view but rather from the sheer spectrum of images which have all sorts of films included.

I need to see this a couple more times  so I can truly appreciate everything that is here and that it is telling me.

Highly recommended to any and all lovers of world cinema.
Posted by Steve Kopian at April 18, 2017