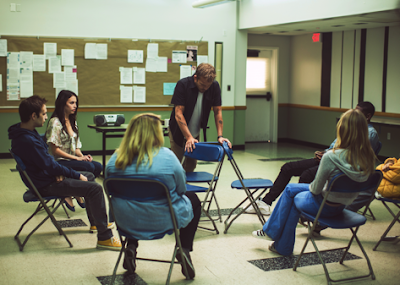 In a school for troubled kids, a counselor plays a game of survival with a group of students- who would you save and why. The game reveals dark truths and perhaps teaches some lessons to the kids.

Screening as part of the Disconnected shorts collection LIFE BOAT is unfairly damned to get lost because the collection is runnings late at night on tree of it's four scheduled play times. Its bad enough that shorts get over looked but scheduling the film after 9PM  is going to severely limit the screenings which is a shame because the film is one that should have an easier time finding it's audience. This is one of the best films of Tribeca.

A beautifully made film this film is a real gut punch. Basically the film record of a group therapy session, the film is as raw and real as many films come. I'm guessing that most people in the audience are not going to be experiencing the kind of depression and unhappiness as the teens on screen, however that doesn't mean the in your face style is going to kick up some not so pleasant truths. Questions about what it takes to survive and what it takes to be popular are brought front and center in a manner that not only rattles the people on screen but those in the audience as well. I was pained and I wanted to turn the film off because the film showed me things I really wasn't in the mood to deal with.

This a beautifully acted film that manages to get us in the heart and in the head as the issues and themes that it raises about what it takes to survive and how society works knock us back on our heels.  This was the thirty something film from Tribeca that I saw but it was one of the few few that left me staring at the screen pondering what in the hell I had just seen. This shouldn't turn you off to the film, rather it should send you running to see it because when it's done you'll know you have just seen something special instead of something that just washed over you