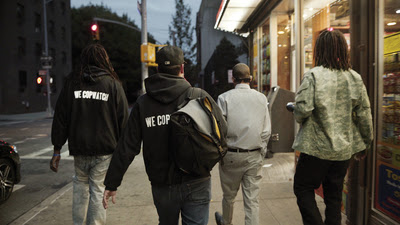 A look at the use of cameras and cellphones to record police activity and particularly arrests in the wake of the Oakland and Baltimore. The film is also a look at the people who serve the community by watching the watchers.

How you react to the film will depend upon how much you know of cop watching. If you are well versed in the incidents that have made national headlines and you have seen reports on the people who record arrests then you may less likely to be in love with the film than if you only have a passing knowledge.  This isn't a knock on the film, rather its simply point  out that while it hits all of the right notes, if you have been aware of the movement there is very little new here.

As a primer this is very good but beyond that the film is just okay, despite being an incredibly important film.
Posted by Steve Kopian at April 23, 2017