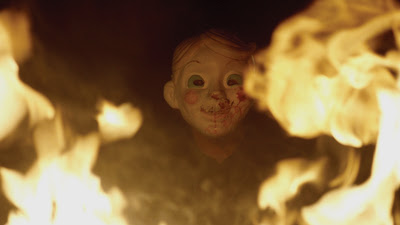 The press screening for PSYCHOPATHS  was a strangely quiet affair. Despite being packed the audience simply sat in their seats and stared at the screen as if it was a average domestic drama. I mention this because normally during a horror film you can see people reacting to starts, shifting in their seats and genuinely being moved by the film. With PSYCHOPATHS they just seemed to sit and when it was done they just filed out. This is odd because more than any other type of film horror films provoke talk and there was none.

I know that is a weird way to begin a review but PSYCHOPATHS is a weird film, Its an atypical horror film that is more a thriller than a scare machine. Its a film that might have been something but which is ruined by narration which promises something that never materializes.

The film is supposed to be what happens on the night a serial killer named Starkwether (Larry Fessenden) is put to death. Paying as a kind of demonic Le Ronde, we watch as the various killers and sickies crisscross each other on the night the narration is called the Great Chaos.

The problem is that the interview clips of Starkweather and the narration promise some sort of grand evening of madness and instead its just a some unremarkable madness, nothing on the order of "Great Chaos".  Watching the film I kept waiting for something "great" to happen. I wanted real chaos. What I got was a killing for money story, a psycho home invasion tale and table is turned on a killer tale, all are good, but none are "great chaos".  This all would have worked if the narration and references to the dead serial killer were chopped out.

There is a good film here, the music is great, the camera work is amazing but at the same tim the film kind of slides off the table.

I blame writer director Mickey Keating who has been turning out genre films with regularity. While he has made films that had moments (DARLING anyone?) he usually either can't pull it together or he does things that cut his own legs off. (Even if the narration didn't kill the film the long haired LA cop with four days beard growth would have).

Worth a try but I'd wait for streaming or cable.

(I do need to say that the narration-in and of itself is really good but its so good it works against the rest of the film)
Posted by Steve Kopian at April 23, 2017