Tribeca 2017 Opening Night CLIVE DAVIS: THE SOUNDTRACK OF OUR LIVES (2017) and concert 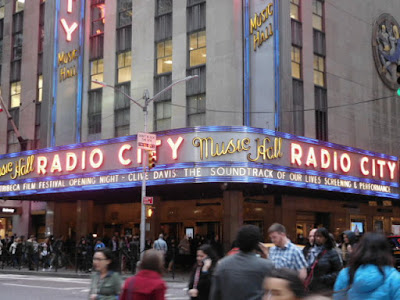 Allow me a moment to gloat- if you weren't at Radio City Wednesday night you missed an amazing experience. It was the opening night of this years Tribeca Film Festival where the World Premiere of the film CLIVE DAVIS: THE SOUNDTRACK OF OUR LIVES occurred and it was followed by a concert that rocked the house and scared me because the top balcony Chocko and myself  were on was moving with everyone dancing. 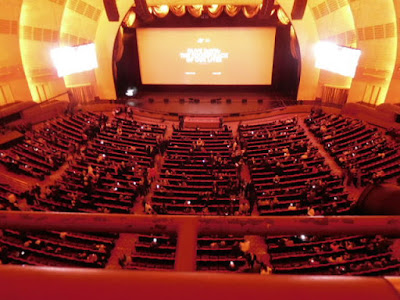 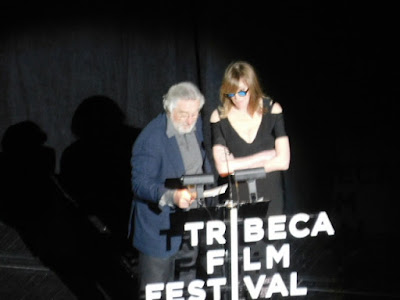 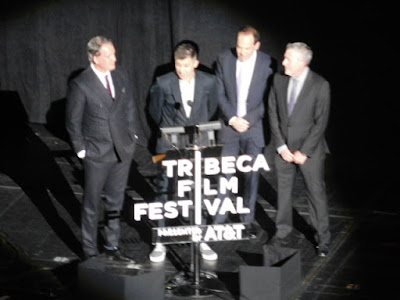 The biggest laugh of the night was unintentional and came when a promotional film from United Airlines played. No one knew what airline the promo was for but when the United name came up the audience exploded with laughter. It continued into the film until the sound of Janis Joplin singing was heard. 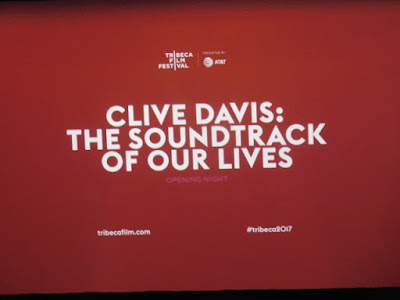 I don't know what to say about CLIVE DAVIS: THE SOUNDTRACK OF OUR LIVES beyond that is what it is- a recounting our our lives through the music one man helped to make. This portrait of the accidental record executive who changed the music industry forever (it all used to be stuff like Mitch Miller) by signing Janis Joplin will have you replaying your entire life in your head. I'm serious Davis is pretty much responsible for everything you love music-wise because he has his fingers into everything or because what he had brought to audiences changed the world. From Janis to Bruce to Puffy to Whitney to Alan Jackson to Santana to (fill in the blank) Davis is everywhere.

To be honest the film is conventional in it's construction and doesn't really dwell on the mistakes he made.  However with someone like Davis, whose accomplishments could film ten hours of film the removal of his misses is minor when many of his hits are glossed over. 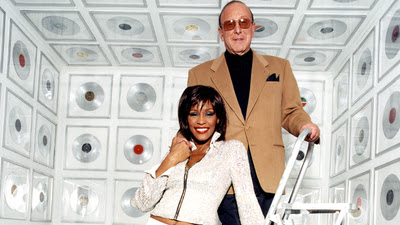 In talking about the film after it was over the only problem with it is that the film's second half has a bit too much on Whitney Huston which cuts into everything else Davis has done. Its a minor quibble and is the only think keeping this from being a perfect nostalgia machine.

And that is what this film is- a cinematic wave of nostalgia- it is a film that allows us to replay the Soundtrack of your life.

After the film there was a wonderful concert where friends and artists who worked with Clive played for his, and our, entertainment. 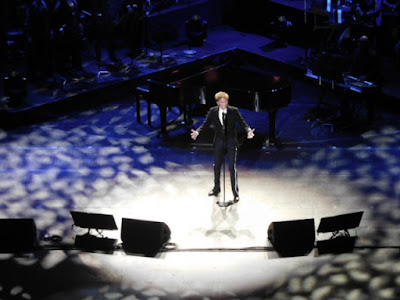 It began with Barry Manilow playing a medley of his hits, all of which were picked by Davis for Manilow. It was a kick as start and made you wonder how you would top it? I mean things were starting on such a high level there was nowhere to go... 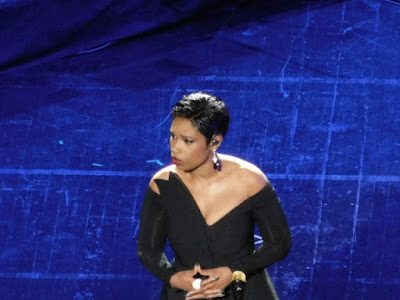 Jennifer Hudson came out to sing Leonard Cohen's Hallelujah. It was one of the best versions, if not the best I've ever heard. There was no where to go...until she opened the Whitney Huston Songbook and ricked the house. She walked into the crowd to dance with Clive before heading back to the stage...and as the audience went nuts and the band played she announced she was done and walked off....mic drop...there was no where to go... 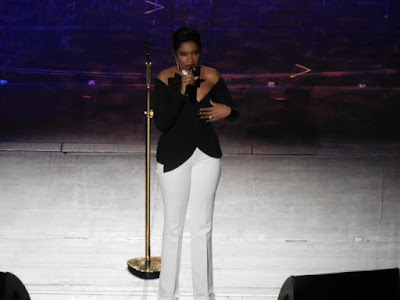 Earth Wind and Fire had to follow and after moment or two  to get up to speed they had the audience dancing in the aisles. I was terrified because the top  balcony Chocko and I were sitting in was noticeably moving with everyone dancing. 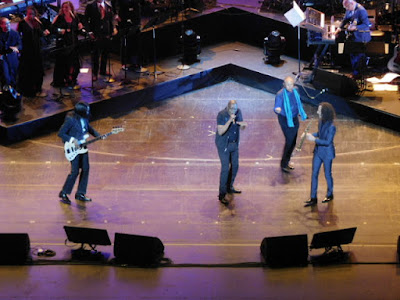 As weird as it may sound but the appearance of Kenny G to play with the group for one song made the audience go crazy. While that may sound weird you have to realize that Kenny delighted everyone during his appearances in the documentary. 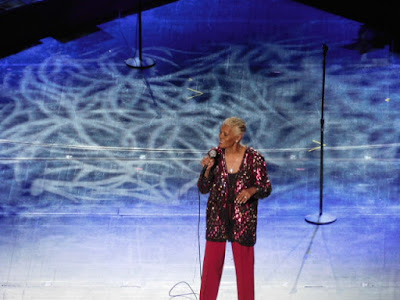 After Earth Wind and Fire came Dionne Warwick. Warwick was a bit of a let down. While she was fine on some levels she didn't have the passion that the preceding three performers had. 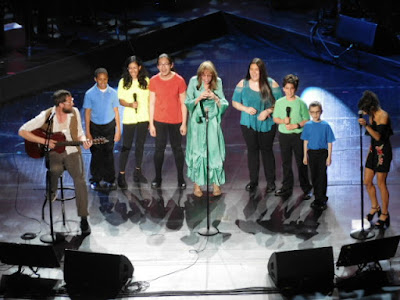 Carly Simon came out next to do a version of  Coming Around Again. Simon's performance was quite good but it took a bizarre twist as the Itsy Bitsy Spider portion of the song went on and on and on... 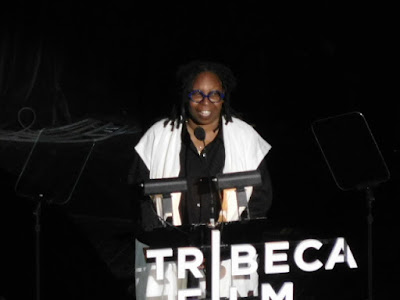 Whoopi Goldberg who was doing the intros tried to explain it but it still was an odd moment. 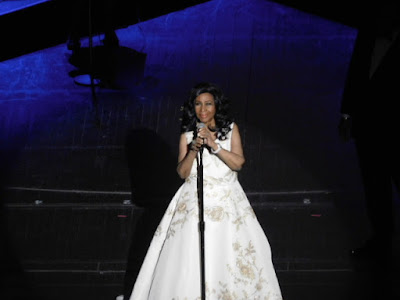 And then there was Aretha.

What can I say but wow. 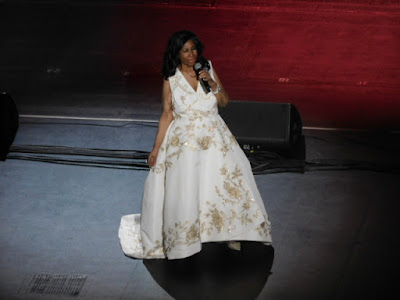 Despite having an upper respiratory infection she showed up and nailed it. She tore through Natural Woman and Freeway of Love. What absolutely delighted me was she sounded wonderful.  I say this because the last time she was promoting an album she was showing up on various TV programs to sing and she sounded less than perfect.  Last night she was note perfect despite the illness. 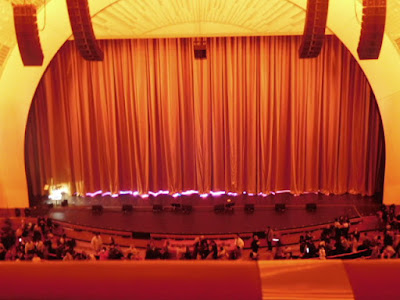 When it was done Chocko and myself wander out into the night but not before pausing, as many people who were at the concert were doing, to take pictures of the marquee to remember a truly spectacular night at the movies. 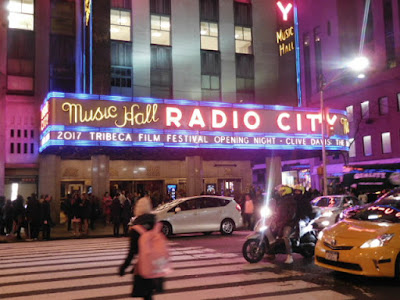 Email ThisBlogThis!Share to TwitterShare to FacebookShare to Pinterest
Labels: american, biography, history, music, not a movie