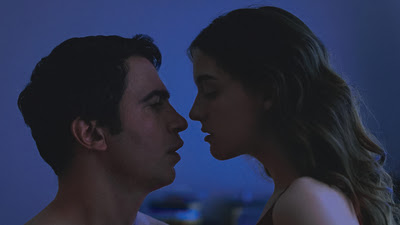 Blame is written and directed by 22 year old Quinn Shephard, who also stars in the film. The film starts with the beginning of the semester at high school and Abigail(Quinn Shephard), who is an outcast, is returning to school after having left the previous year because of an incident. The other kids at school bully her, calling her "Sybil" and are just being awful to her.

The film focuses on the drama class. The teacher, played by Chris Messina, decides to have "the Crucible" as their show. He casts Abigail as the lead which causes her classmates to be jealous and thus bully her even more.

Abigail befriends her teacher, but what begins as a friendship soon changes.

This film reminded me of films like Heathers, Carrie, and Mean Girls. I enjoyed it, but it's been done before. There are some differences of course but it's the same idea. Also, while they kept referring to the incident that happened the previous semester, it was never disclosed what exactly happened which I found frustrating. The other part I found strange was not knowing where Abigail's parents were. They are shown in the beginning before she goes back to school but then never again.They're never home and there was no mention of them. Seemed odd considering Abigail had an "incident" that her parents were never around.

Overall, this movie was good, and impressive that it was done by someone so young, but another than that I would say you can wait to see it on Netflix or whatnot.
Posted by Steve Kopian at April 22, 2017