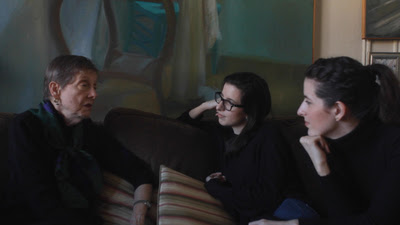 Screened at Tribeca as part of The N.O.W.Showcase Program B  SHIVA is one of the best films of the festival.

The film is a group of friends and family sitting around sitting shiva for the dead father of one of the women. Death is discussed, in appropriate things are said, yarmulkes are worn and very funny things happen.

I was roaring with laughter during this film because despite not being Jewish I have sat shiva and I have gone to funerals and this really closely approximates what happens- though minus the recording of a podcast or the blowing in eyes to look sad.

I loved this film and could easily have watched the madness for another two or three hours.

This was the first film I saw during the festival proper and it is one of my favorites.
Posted by Steve Kopian at April 20, 2017