Tribeca 2017 Triage - a place holder until the reviews start tonight 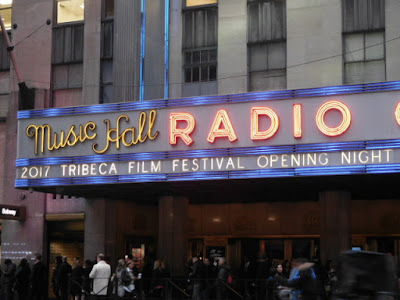 With Tribeca starting last night at Radio City (Chocko and I were there and a full report is coming soon- but the film and the concert were both great) a couple of quick notes about our coverage.

First we’ve seen somewhere around 35 films so far and we are planning on covering at least another 45 events- meaning talks, films, red carpets, interviews and other fun things. While I could give you a list of what we’ve seen I really have no idea what we are going to end up seeing. Despite the best laid plans everything ends up influx as we flee bad films are fled in search of an alternate choice, interviews run long and word of mouth changes our mind.

The basic way we cover the festival is we pick the things we feel are must sees and make concrete plans to see them. Then based on the schedule everything gets filled in around the must sees. As opportunities appear during the festival things change and change again. Outside of my must sees I’ve rarely had a schedule not change almost daily.

I will be posting daily reports as I go along. Longer reviews will come where I get moved to say anything extended.

Ariela is second seating Unseen’s coverage and will be seeing a full slate. I’m not sure what she’s seeing other than a couple of titles, but I do know she has more than just reviews planned. Joe Bendel has offered to share some of his coverage so we will be having a lot of stuff covered.

I know that some films are going to get multiple reviews. There are a couple films that Ariela and I both saw that we had differing views on so I’ll follow her lead a day or two later.

Reviews will start hitting tonight at around 7 PM. I’d post earlier except we are embargoed until after the screenings. Once the reviews start look for a heavy concentration of posts straight on to May 7. I have no idea how this will all go down but it should be interesting.

Okay time for me to dive back into the dark and see more stuff….
Posted by Steve Kopian at April 20, 2017