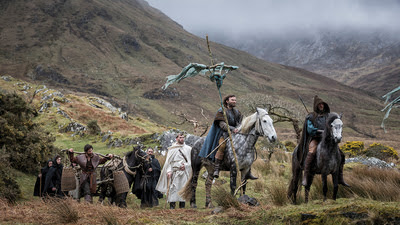 In 1209 AD needing a relic that may help turn the tide in the war against it, the Catholic Church sends a Cistercian priest  to a monastery on the West coast of Ireland to collect it's most holy relic. Accompanied by a group of monks the priest takes the relic and heads off. However things get complicated as the warring factions in Ireland attempt to take possession.

Thoughtful and thought provoking adventure film PILGRIMAGE ponders the varieties of religious experience and belief. What does one's faith make one do? Is belief simply a means to an end? Is there a god? Is it possible to have a pure heart? All are explored, often with out any real answer. Indeed the lack of answers is summed up by the final haunting line, "Where to now?" There is no answer but the question will haunt you for a long time after the credits roll.

If you don't like the questions that are quietly being asked there is always the adventure. The slow trek across the country side is full of dangers, not all of them apparent. A bloody, violent affair where sudden death can come at any instant and in the most horrible way (one man's entrails are pulled out of him while he watches) this film is very much into showing it like it was. In a weird way the film is a brother to the film BLACK ROBE from several years back with its realistic portrayal of a priest traveling to a far out outpost.

After the screening I had a couple of conversations with people who didn't like the film as much as myself. Some had problems with the odd split between action and intellect. It simply didn't match up the way it should. Others didn't like it for technical reasons, the cinematography wasn't lush enough or there was a burp here or there. In most cases people said effectively they didn't like the film because it didn't do what they wanted. I understand that but at the same time they aren't the filmmakers and we have to accept the film on it's own terms.  I think on it's own terms it works beautifully.

While not the best of the fest the film is a really good one that I hope to visit again soon.
Posted by Steve Kopian at April 28, 2017