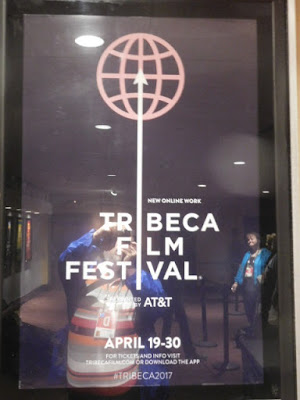 Every year I do a post that is a collection of quotes from Tribeca films. This is more for my amusement rather than anything else. Some of them may mean something to you, some may not. Many are are non sequiturish as they seem cut from the film.

CHUCK is a great film about a mobster from Brooklyn in the late 70's named Chuck Wetner who fought a bear. - a critic talking to other critics about films she loved and seemingly completely misunderstood (and she really said Wetner)

Once you've seen the inside of the Machine, they don't let you leave - BUSTER'S MAL HEART

Thank you for not killing me - DABKA

You always said you couldn't kill anyone unless they did something terrible to to one of your kids- what are you going to do now? - son to his mother after killing his sister in THE FAMILY I HAD

The German's lost the war but won the fashion show - Gilbert

You don't go to Florida on purpose, it's a death sentence - SWEET VIRGINIA

The devil lied to me - THE LAST ANIMALS

Bowl. We are in a bowling alley-Bowl-otherwise you look like a child molester with those shoes - LITERALLY RIGHT BEFORE AARON

Politics is show business for ugly people - GET ME ROGER STONE

(he's) Just a guy I was obsessed with hen I was messed up on Lithium, thorazine and PCP - ENDLESS

You mess up everything. But you're family and that's what people do - ENDLESS

(as everyone begins to take a shine to Mr Long he asks his small friend)
Why is all this happening?
Because you act cool and don't say anything -MR LONG

When she said she makes chizo that looks like her grandmother does it mean she looks like this? - TRIP TO SPAIN

We are not normal, we're Americans - NO MAN'S LAND

They are speaking of how terrible things are while eating good food, carrying expensive weapons and driving fancy trucks - NO MAN'S LAND
Posted by Steve Kopian at April 30, 2017