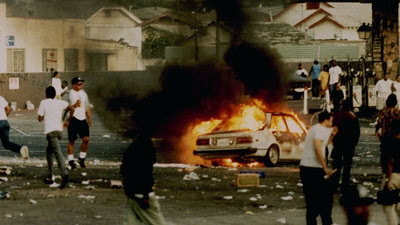 If I were to compare LA 92 to Ava Ava DuVernay's 13TH, LA 92 is is pure pained raw emotion while 13TH is a long pained scream where the talking heads lift you out of the emotion. There is no respite, or no time to think in LA92, there is just a two hour pounding of the injustice and pain that sparked the rights and bleed out in death and destruction across Los Angeles. LA 92 makes you feel, really feel the suffering and thus understand why things happened they way they did.

Made up entirely of news and home video footage of the LA riots and the events that preceded them the film actually begins in 1965 with the Watts Riots. A news report explains what happened and ends with the ominous warning that if things don't change worse riots will come... And they do. Jumping a head to the years just before the riots we watch as events march along until the Rodney King verdict lets the genie out of the bottle and rage and anger take to the streets.

You've never seen the riots like this. In your face and inescapable the tragedy of what happened sweeps across your heart. Its made all the more painful because for the better part of an hour we are walked step by step all the way up to the riots. This is no longer a series of news reports that happened somewhere else, but this is the culmination of a series of events that we understand. Why are people pissed off? Because they have been abused and we know exactly how and why and there is no other way to express it. And because there are no talking heads and just recordings of the moment there is no second guessing, no attempt at explaining there is just the long pained scream of rage in the moment. We have felt it welling up from the first frame onward and we know why  the riots happened.

Once the riots starts you are there. Through brilliant editing and choice of footage we get a more then a sense of the chaos of those days. The fear becomes real, the emotion and pain on the screen becomes physical. When the film ended I felt sore and tired all through my body. Sitting on the subway I felt like I had been beaten up.I hurt so much I wanted to cry. There was nothing really wrong with me its simply by body reacted to the emotional stress the film put me through.

I know I can not explain what seeing this film in a theater is like. When it ended no one moved. Everyone just sat in the darkness staring at the screen. It wasn't until the lights came up that anyone moved. I turned to Hubert Vigilla who was sitting next to me and we just said nothing. After several attempts at it I finally joked that it was "one of those" - meaning the sort of film that takes away any ability to speak. We then texted for two hours afterward trying to find words.

I have no idea how this will play on TV or a laptop. I certainly can't imagine this broken up by commercials or stops on a DVR. This is a film that is designed to be seen in one chunk in a dark theater.