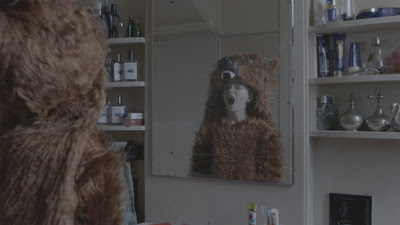 Elina Psykou's SON OF SOPHIA is a trek into what is becoming a new genre the Greek Weird Wave. This is movement that brought us films like DOGTOOTH and other loopy films. The films are more often than not extremely mannered and seemingly weird for the sake of being weird. Things are not wholly crazy, just off enough that you’re left feeling extremely uneasy and unsure of what the next step is going to be. How people react to the films depends on their tolerance for strange happenings. How you relate to the off kilter and mannered constructions of the film will determine how you react to the film.

The film concerns 11 year old Misha. For the last two or three years while he has been at home in Russia his mom has been in Greece.  When she sends for him, he thinks everything will be as it was and that he and his mom will be together again. However he finds that he has a new dad. This send him spiraling off and causes reality to merge with his take on fairy tales.

As much as I love strange films my tolerance for this sort of weirdness is low. To be honest I’m not sure what I think of Son of Sofia. Well-made on all levels the film is way too mannered to really work for me. I was probably twenty minutes in when I realized that the film wasn’t really interesting me. I would be able to stick it out to the end, I wanted to see how it was all going to play out, but I wasn’t connecting on to anything on the screen on most levels.

That said if you are a fan of Greek weird give it a shot
Posted by Steve Kopian at April 21, 2017