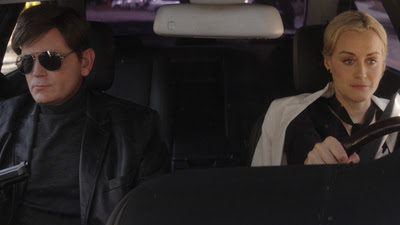 A Netflix release TAKE ME is going to find a long life as film you don't have to pay per head to see. This isn't to imply that the film is bad only that this will play best on TV. The problem with a film like TAKE ME is that once things are set up there is only a few ways it can go. The fact that the outcomes are limited can be helped by the comedy being rip roaring and non stop funny. Unfortunately, while entertaining TAKE ME never achieves the heights it's shooting for.

The plot of the film has Ray running a service that for a fee will kidnap you and hold you hostage. Some people want to be scared into losing weight. Others want a thrill. When Ray get a call from Alicia asking for a whole weekend adventure he's not sure he should take it. But the promise of big money makes him take the job. The trouble is once the ball starts rolling things seem to go sideways and Ray begins to wonder if he is being set up.

Odd ball black comedy is full of humor but is sparing with the laughs. This is a film you smile with not laugh at. That's not a bad thing except that the lack of full on chuckles gives us time to ponder where this is all going. That's not a wholly good thing since we are left with is this set up or not choice and little else- with the result we've written the rest of the film a third of the way in.

I didn't really laugh at all during the film but I found that when it was over I wanted to see it again, largely so I'd know if knowing where it was gong would change how I felt. My over all concern was that the thought of people paying to see this in a movie theater was kind of asking too much of an audience since the film is too small for a big screen.

That said as something to see on Netflix this film is something that is worth trying.
Posted by Steve Kopian at April 26, 2017