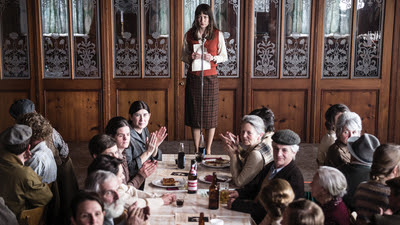 I bet you didn't know that until the early 1970's women could not vote in Switzerland. They didn't have many rights either since the Divine Order of things was to defer to the men. DIVINE ORDER is a film about the vote to give women the vote in what one would think would have been a progressive country.

Focsing on a woman named Nora who lives in a small town the film is an account of how women who didn't think to much about politics became political and worked to get women the vote.

Tat may sound dry and bumpy, but the truth is the film is a charming tale of one woman, her family and her growing circle of friends at a moment where things changed. While the conclusion of the story may seem like a given one that is not the case. The truth of the matter is that nothing is certain and as the end credits state women were still fighting for ome rights until very recently.

That the film works as well as it does is thanks to the fact that the film is ultimately about characters. Unlike the recent SUFFRAGETTE which at times seemed to be about the poltis more than the people, DIVINE ORDER never leaves its characters. There is more going on than the right to vote, this about one woman and her friends looking to change their lives on all sorts of levels-even sexual. I laughed out loud and I was moved to tears.