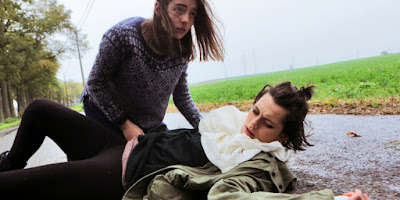 Initial word on RAW was that those who didn't flee from the screenings were too busy throwing up in the aisles. Word was so strong that even the hardened horror fans I knew approached it with trepidation. Having seen the film I'm left scratching my head at what all the shouting was about.

The film has a young vegetarian woman heading off to veterinary school. Once there she is forced to eat meat during a hazing exercise and it causes her to change...

Basically a series of connected deeply disturbing set pieces, the film is determined to make the  audience feel wrong and off kilter. It's been the very rare recent film that has made its audience's stomachs turn as their brain wonders what pit of hell this film crawled out of. Unfortunately once you get past the visceral horror moment there isn't anything here.

The problem with RAW is that the script of this film is so lacking in connective tissue that all the film really has is the shocks to keep you watching- worse, you're watching simply to see what the next terrible thing is rather than because you actually case about anyone. The script is a complete mess.

Beginning with a car accident that is only kind of connected to the rest of the film, the film is a series of WTF moments that never feels wholly real.  Set in a veterinary school where all the kids are hazed  by having many of their possessions including the mattresses  pitched out the window the first night the film instantly severs its ties to any sort of reality since the school feels more like a dystopian institution or blood cult rather than one of higher learning. Where is this place? What planet are they on?  I mean the school allows the students to not have mattresses? People can wander about covered in blood and upperclassmen can toss paint around and it means nothing.

The time frame for the film- essentially the first week of the school year makes no real sense. All of the things are suppose to happen in a week- really? I didn't think it was a week except that the mattresses stay on the lawn and we hear the air horn at the end- so the film is saying all these these things happen in a week. Not bloody likely- if you look at how long things should be and you'll realize this couldn't be a week.

Plot threads come from nowhere and go nowhere. A sequence mentions cheating but it comes from nowhere and goes nowhere. An implication of cheating is brought up in one sequence and then is dropped.  One character is hit by a car and just walks it off. None of the weirdness spiraling out of the sisters at the center of the center of this bothers any one I mean one guys lip is bitten off and it's no big deal. Of course murder is another matter but where the hell did that come from? And of course the final denouncement is the ultimate WTF when you realize the girls' parent knew this would happen but let them both go to the fucked up institution of their  youth anyway.(I won't even get into how the whole final scene seems to have come from another film entirely)

While I hate that filmmakers regularly turn out illogical scare tales, at least with someone like Fulci there was a enough connectivity there to keep it working-even if it was just the madness of the supernatural. It might have worked if they had connected it up, but all links are weak its just these disturbing sequences one after another. It even might have worked if it had pulled it together at the end but that final scene (or scenes) left me wondering how much, if anything was cut out of the film, or if the filmmakers don't know how to tell a real story.

Frankly as a thrill ride this is a great stomach churner but as a really horror film or even a coherent film this film really is a god awful mess. Without the story and the characters you have no reason to go back to RAW because once seen the shocks are just random people tossing paint around instead of characters we really care about having cathartic eperiences.

Recommended only for those who want to see disturbing sequences but not for anyone who wants a horror film or a good film.
Posted by Steve Kopian at April 19, 2017