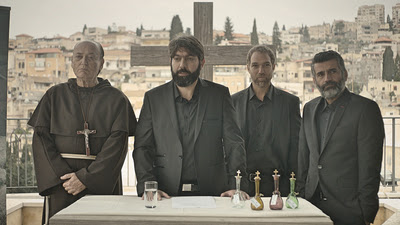 Wonderful satire that is very funny, very touching and very thought provoking all at the same time. Simply put this is one of the real gems of the Tribeca Film Festival.

Adam lives in Nazareth and is looking for a better way. His life is in turmoil, his father is dying, his wife is pregnant wants a new room for the baby and he wants to make enough money so he doesn't have to worry. As things transpire he hits upon the idea of selling bottled air from the Holy Land.

A frequently laugh out loud film, this is more than just a comedy. A pointed look at the tourist trap mentality of the Holy Land, the film also takes pot shots at the state of Israel, Arab Israeli relations as well as the relationships between the various religions. This is a film that will have you thinking as its making you laugh.

The reason that the film works is that writer director Shady Srour has given us a great group of characters to spend time with. From Adam to his wife, his parents, his friends and all the hawkers around him, these are a bunch of really good characters that you want to spend time with. I especially love Adam's dad who throws out some beautiful pearls of wisdom and bits of philosophy

I could go into the films technical aspects, its wonderful score, Its staging as series of single shot scenes and on and on, but I don't see the point since what you are going to remember is the laughter in crazy scenes like the traffic jam.

Truthfully this is a near perfect film with only the endless honking horns over the end credits to count as a flaw.