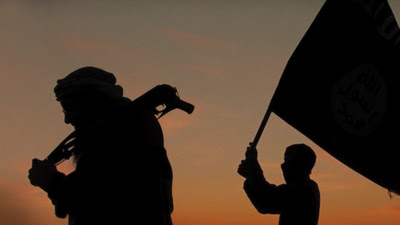 The first thing that must be said about the film is that the film is is not wholly the on the ground story of the citizen Journalists in Raqqa. While we see what is happening in the besieged city most of the film is following the members of Raqqa is being Silently Slaughtered (RBSS)who are now in Turkey and Germany as they try to remotely cover the events in their home city.

I'm saying this  up front because walking out of the film I was kind of disappointed. I wanted a more detailed look at what it was like living in an Isis controlled city. While we get some of that mostly we are following some guys who are being hunted across Europe and who are trying to save their home remotely before it's too late.

Telling the story of the men behind RBSS the film charts the start of the Syrian civil war the flight of the Syrian forces and the coming of Isis. We watch as the group changes the city an their atrocities are cataloged by the RBSS who eventually have to flee when a price is put on their heads. We then watch as they try to continue to get word out via their connections still in the city.

This is a harrowing tale. One is left to wonder how we would deal with the emotional toll of being hunted losing friends and family. We truly come to understand the cost of the fight in the last shot of the film where one of the reporters drifts off to sleep, his body spasming with PTSD from the tension. This truly is life during war time- though in a way worse because for these guys there is no visible danger.

While I complained at the top about it not being as advertised I think the film works best because of it.  In a way there are almost too many Syrian war docs out there and the fact that the film takes a road untraveled works in its favor.

This is a very good doc on an important subject. Recommended.
Posted by Steve Kopian at April 26, 2017