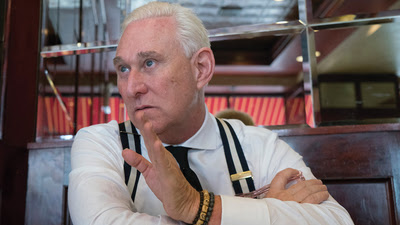 While you have to admire Roger Stone's balls at the things he's done, he is ultimately a charming dick who will make his greatest contribution to mankind when he finally shuffles off this mortal coil. Don't get me wrong I like the son of a bitch but my love for America and mankind in general makes me realize that we'd be better off if he never started with his dirty tricks.

Ultimately its a matter of emotionally I like him but intellectually I want to punch him in the face.

Dylan Bank, Daniel DiMauro, and Morgan Pehme's GET ME ROGER STONE is the Roger Stone story, largely in his own words comes . In its way its a vitally important document, it shines a light on a man who has shaped American politics for the last 40 years.  Stone rose to prominence when he was was named as being one of the Watergate conspirators. Stone's role was minor but being named gave him cache which he turned into life that altered the way politics are conducted in America.

In the film Stone is a silver haired devil. Literally. Sitting drinking fine alcohol, smoking big cigars while sitting in finely tailored suits with suspenders he looks very much like the movies depiction of Satan.  Add to it the fact that Stone speaks so charmingly,  and so honestly (he admits he has no morals because all he wants is money) you kind of will begin to think he is straight from hell.

It is as good a look at Stone as we are ever likely to see where he is involved with it. A warts and all examination of the man this film lays it all out so that we can really understand the damage the man is doing as part of Trump's inner circle. And when I do mean warts and all I do mean it since we get to see all of his missteps, including his infamous sex scandal. Not that any of it really matters because Stone has survived it all.

One of the small gems of information in the film, and something I kind of wish had been dealt with a bit more, is the fact that some of Stone's triumphs may not have been quite what he sells them as. Going back to Watergate and onward there are several times where Stone increased his reputation by inflating the way things really happened. He simply took credit for things that no one wanted to go near.

Another reason that this film is important is because it shows us not only Stone, but many other people connected to him, a good number of which ended up working with Donald Trump either in his campaign or in the White House. The film really lets us know who they are and why they are dangerous- they really don't give a rat's ass about anything other than making more money.

While I like the film a great deal the film kind of runs out of  steam in the final third. This is not the filmmaker's fault, the story simply slows to a crawl. Once we get to about the time of the recent presidential election there we're pretty much run out of revelations regarding Stone. While there is no doubt he was farting around behind the scenes of recent events, Stone's smoke and mirrors act hits the high gear and he clams up. Because things were still playing out as the film was being made Stone smartly controls his statements as a result what we see just becomes more of the same from the previous hour.(Basically he is waiting for things to shake out so he doesn't say anything to get himself into trouble and he's waiting to find a juicy tidbit he can take credit for doing)

A vital and important film- the film is must see.
Posted by Steve Kopian at April 27, 2017