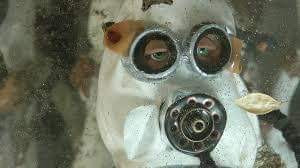 Somehow over the last year I’ve managed to miss Meeting MacGuffin despite it playing at numerous film festivals I’ve covered. No matter- I’ve seen it and now all I can say is I am dying to see the first film in the series (Hanging by a Thread) and I am looking forward to the next one in the series (The film ends on a cliffhanger of sorts)

Director Catay Plate’s film is set after humanity has literally fallen apart. Some survivors, known as the clothespin freaks decide to put the feet, hips and brains together to begin to bring humanity back in order to return balance to the world. As the freaks take the homies underground to see a ground hog to be rebuilt we get a lesson about what exactly happened.

Employing a style that is part Robot Chicken, part Jan Švankmajer, part Bothers Quay this film is a charming feral nightmare that sucks you in and drags you along. Watching the film I was at first hooked on the weirdness, then I became intrigued by the story and then I was really curious about the whole world where this was taking place. Long before the “To Be Continued” card appeared on the screen I was hoping that there would be a shot at more film set in the world on screen. As I stated at the top there is more, with a first part done and another to come.

What a complete joy. Yes it’s weird and strange and disturbing, but it is also full of life and ideas. At a time when many people are pondering if the earth would be better without humanity, here is a film that argues we are part of the balance. Its refreshingly hopeful.

I would love to discuss the thematic elements within it but I don’t feel I can until I can see all the films in the sequence since there is so much too chew on as is, I want to take in the whole meal.

As it is I kind of loved this film a lot. Highly recommended where ever you can see it.
Posted by Steve Kopian at October 27, 2018