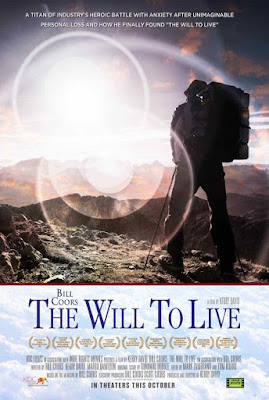 Good but very hagiographic look at Bill Coors who ran the Coors brewing company until he was 99. Coors was not only a titan of industry but a self help guru learned to lose stress and just deal with the important things. Chronicling how Coors grew up in a family cursed by depression, the film shows how Coors battled his own demons to find a way out of the darkness.

Feeling more like an extended infomercial then a normal documentary I kept waiting for a cue to "call in now." This film is in love with Coors and all that he has to say, unfortunately it is so saccharine that you kind of turn off to the message. Its a little too much in a bubble celebrating how Bill Coors has all the answers. While he most certainly has a great deal good to say, I actually love his message of hope, I hate the packaging which is much too" rah rah isn't he great".

Worth a look now that it is on VOD because of the message, this is not a film for all audiences.
Posted by Steve Kopian at November 01, 2018