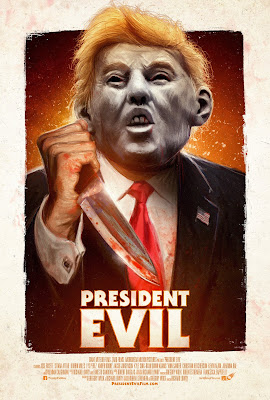 Releasing at the worst possible time the HALLOWEEN riff/satire PRESIDENT EVIL hits VOD platforms and I'm not sure what I think.

Remaking John Carpenter's classic slasher film, PRESIDENT EVIL begins with a little kid killing his mother and her lover on the day Ronald Reagan was elected President. Almost four decades later the grown up killer breaks out of the asylum and dressed as Donald Trump, goes after three girls, one Mexican, one Muslim and one Haitian, with a large knife painted like an American flag.

Subtle it is not.

As a political statement it is very clear in its intentions. This is as obvious a statement of what Trump is trying to do as you can get. It might have been amusing had the timing of the release not made the ability to laugh at or with it catch in your throat. While Trump is not physically responsible for the bombing and shooting done in his name he is the evil puppetmaster behind it all, so a film like this, while obviously planned way in advance is not something one can watch with any sort of ease now.

Even allowing that the release was taken over by real world monsters the film has problems. Its mix of low brow humor, horror and political commentary doesn't always come together. There are moments that work and moments that don't. I know the fact that the film remains tied to HALLOWEEN kind of works against the film since it doesn't allow for the film to really shine. I say this because some of the better moments are not the ones riffing the classic film.

Is it a good film? It would have been a pretty good trailer or short film but as feature it's all over the place..

In the wake of the recent tragedies I you not debate the sanity of releasing this film now - It was a bad idea to do so. October Coast probably should have held up release instead of going ahead as planned. While the odds are that unless some news organization discovers the film and creates a furor, the film is quietly going to do what it does and before it disappears. As such the release probably should have been held up a couple of weeks because it wouldn't have made a difference.

For my part in the madness in reviewing the film and pointing it out that it exists, I've thought long and hard about that. Should I have reviewed it? Maybe, maybe not. Part of me wants the film to not cause pain and for the film to just disappear but part of me wants some sort of word out there to say what the film is and to let people know it's not worth bothering with (unless you are a slasher fan). If I have a review out there maybe the curious won't be throwing money at the film as a curiosity they will probably turn off a short time in.
Posted by Steve Kopian at November 04, 2018