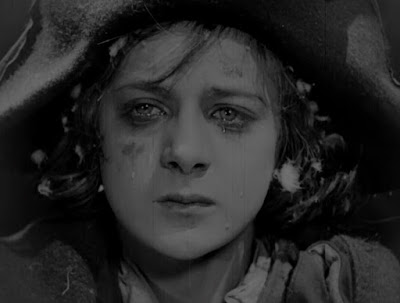 One of the joys of the Covid19 pandemic is it gave me time to actually watch things that I wanted to for a long time...and in the current case a really long movie. Because I had the time I actually sat down and watched the current restoration of Abel Gance's masterpiece NAPOLEON. The current BFI release version is almost 6 hours which makes it about two hours longer than that version I saw back on VHS in the 1980's.

For those playing the home game a quick back story on the various versions- The original idea was to make six films covering the entire life of Napoleon. Abel Gance secured the money and blew it all on the first film which premiered, according to the BFI commentary track,  in two versions a six hour version and a nine hour version in Paris. Over the years Gance recut the film and footage was lost.

Kevin Brownlow in the 1960's made a film about Gance and got to see sequences that had been believed to have been lost  for decades while putting the film together and decided to attempt a restoration. In 1981 a version running just under 4 hours premiered with a score by Carmine Coppola.

In 2000 Brownlow released a version running over five and a half hours which is the current cut. If you didn't know it's because Francis Ford Coppola got into a pissing match with the BFI and Brownlow when they turned to Carl Davis to score the new cut. Coppola wanted his father's score used despite the fact that he died a decade earlier and there was no one to extend the score. He tried to block a series of screenings in San Francisco but that came to naught. However since Coppola insists he owns the film and screenings in the US are blocked.  That is why I bought the BFI DVD and had it sent to me.

I'm not going to go into details about the film, I want to just keep this short. I have notes so something longer may follow.

However, for all it's power the film is kind of a mess at times and as a result of the current version missing a third of it's longest run time. It is dramatically all over the place. Watching it there you can sense that things are missing. Watching the film with the commentary track there are several mentions to sequences that were shot, that were in the longest version and then disappeared.  Most of the missing stuff has to do with the drama as bits with Josephine and some of the secondary characters. The result  are moments where a shot should have resonance but don't because we didn't see something. Indeed one missing sequence ends up referenced in the restoration itself via title cards because what happens in it (Napoleon makes cardboard boots) explains what happens in the next sequence(the boots are wrecked).

A further problem with the film is watching it sans the commentary track there are layers of context and details that are completely lost. When I just saw the film I didn't get the relationship of Tristan and his family to Napoleon. Never mind the planned six film arc, I didn't catch who he really was. I didn't fully know who certain important Generals and nobles were and why they were important. Clearly it helps to really know history or to know that some of the problems may have been rectified in removed sequences.

Another problem with the film, though it's only in retrospect, is that Gance is setting things up for the whole series of six films. Time and again the commentary pointed out people who the camera lingers on in what are essentially cameos in this first film but who would have been important in later films. There is so much foreshadowing I felt I should have read a bio of Napoleon before watching it.

Watching the film it's clear that Gance should have been working today and making the film for HBO or Netflix.

While I can pick on the film for it's understandable flaws I am also in awe of it.  Most of what makes up the first two acts is stunning with some of the most incredible sequences I have ever seen. The snowball fight is so amazing I can't believe it was ever cut out. The storm at sea is jaw dropping and I am trying to imagine how that worked as the lost triptych. The Battle of Toulon is one of the greatest battle scenes ever put on film. It exhausted me.  Other shots and sequences, most done in camera, make me shake my head.

What could Gance have done with today's technology?

I think the second half is uneven. The second half doesn't get the balance of drama and action right, especially since the first half has so much going on that it is like slamming into a brick wall after 3 hours of slowly building momentum. Yes the courtly turns and romance or Josephine are important but it slows the pace after the storm and battle sequences.

Speaking of battles, I watched the final sequence a couple of times both in the legendary triptych and without.  I don't think the single screen version works all that well. I don't think it gets the emotion quite right.

And to be completely honest I don't think that the triptych wholly works. Yes it is viscerally over powering even on a small screen. Yes it has moments that have been rightly reproduced as stills. However as over powering the spectacle is I don't think it's as good as some of the earlier sequences. I think the problem is that Gance tried to do too much. A summation of all that went before, a further exploration of ideas and a need to make something so freaking amazing he could keep going with his baby. It certainly is amazing, but I was more moved by the Battle of Toulon.

My issues aside, this film still amazes. It is, as I said above, one of the greatest films ever made. I would love to see it projected on a big screen with a live orchestra- with the Carl Davis score which simply blends in in ways the Coppola one doesn't.