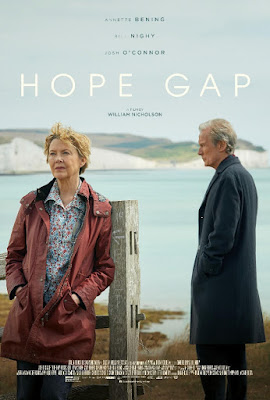 As I was watching HOPE GAP I got the sense that I had seen this before. Clearly I hadn't seen the film, but something about the story, the collapse of the 30 year marriage and the fallout in the lives of the couple and their son, was familiar. There was something about the turn of the phrases. It was only when I really looked at the material on the film that I realized that it was based on writer director William Nicholson's play THE RETREAT FROM MOSCOW which I had read a couple of years back.

I mention this because despite being opened up much of HOPE GAP feels like a play. There is a minimum number of sets, there scenes play out in long discussions and there are long passages of recitation.  You can feel the film being rather easily being transferred to the stage...

The other problem is there is a sense we should be reaching deeper into the souls of these characters. Because the film feels stage bound in some ways we get sense that we aren't really seeing all we could with the characters. I think this is the result of the film being a verbal film more than an action film people talk to us and each other, telling what they feel and did instead of showing us. Again this works on stage but not on film.

And yet despite my reservations I liked the film. That the film works as well as it does is due largely to the cast of  Bill Nighy, Annette Bening, Josh O'Connor who sell the proceedings so strongly that you realize that you'd gladly let them just read the phone book at you. They are why you must see this film if you want to see great acting.

Additionally despite the static nature of the drama the dialog is masterful in someways completely compelling. As I said at the top the turns of phrase were familiar to me because they stuck in my head from when I read the play.

Ultimately HOPE GAP is a good film with great performances and is recommended.
Posted by Steve Kopian at May 06, 2020