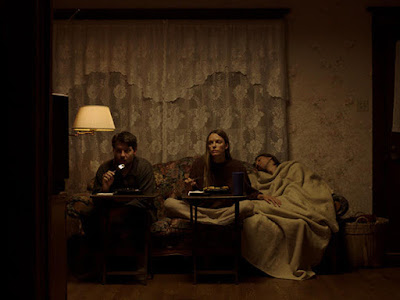 Dwight and Jesse have to care for their younger brother Thomas who is sickly and must live on blood. With no normal means of getting it the pair are forced to hunt people on the outskirts of society, who won't be missed, in order to feed their brother. Unfortunately the endless cycle is taking it's toll on the family as Dwight wants some other life and Thomas wants to go out and be with people. Jesse meanwhile will do what she has to keep her family together.

MY HEART... is a great looking (receiving a Special Mention for Best Cinematography at this year's Tribeca Film Festival) art house horror film. It is a film where the look sets the mood and the place and it makes you feel claustrophobic. We are trapped in the world of the characters with no way out. It is oppressive and you really don't want to be there, and that is before anything terrible happens.

While the film opens with Dwight looking for some food for his brother the terrible stuff comes a little bit later. After a period of carefully modulated character development, which director Jonathan Cuartas uses to amp everything up, the trio's carefully constructed life begins to fall apart. Things begin to go wrong, occasionally awfully, making an already difficult situation even worse. There is a point where the moody art film turned "grindhouse" and I reacted audibly. While it is never overly gory, what is happening is clearly unpleasant.

And as unpleasant as this film can be, ultimately this is not about blood and gore but about family. In the press notes writer director Cuartas said that the idea for the film came from watching his grandmother slowly die and his observations about how his family reacted.  This is a film about how the hovering presence of death kicks us apart and brings us together.

I really like MY HEART.... While I am not going to lie and say it's perfect. I do think that once the film really begins to move, that once the grindhouse overtakes the art house the film improves and becomes something you can't stop watching.Once the film turns you have to see how this is all going to go down. And while the film has an ending I'm still really curious about how event will play out after the credits roll.

Now a word of warning lest you think that you could magically jump to the second half, you can't. The reason the second half of this film works as well as it does is because Cuartas takes great pains to set up the characters and situations to the point where we understand and like everyone. As much as we are uneasy with what is happening there is a basic goodness to the trio which we respond to, and which makes our reaction to the firestorm that comes down all that more intense. We don't want to see the shit storm even though we know going in it's coming.

Will you like MY HEART...? I don't know. If you want balls to the wall horror with blood and body parts flying from the first frame take a pass. If you don't mind a film that takes it's time, that can be a tad too arty, but which will give you characters you care about and situations that will make you fear for their safety then this is a film for you.

Ultimately MY HEART CAN'T BEAT UNLESS YOU TELL IT TO is a small gem of horror film that is worth a look. Sadly being forced into a virtual festival may keep word of mouth a bit muted but if you can put this on your list of films to see when it plays near you, this film will find the audience it deseves.
Posted by Steve Kopian at May 08, 2020