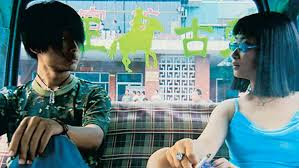 Two thousand years ago, a Chinese sage named Zhuangzi dreamt he was a butterfly, flying freely through the air. Upon waking, he was momentarily confused: was he really a man dreaming of being a butterfly or a butterfly dreaming of being a man? Flash forward to the year 2001 and a young singer living in the industrial city of Datong talks with her lover, explaining that millennia ago that same sage taught that humans should seek out the things in life that feel good. As she speaks, she draws a butterfly, the same butterfly she has tattooed to her chest.

Such is the state the characters in Jia Zhangke’s Unknown Pleasures find themselves in, suspended between reality and dreams. On the one side there’s their harsh existence in a nowhere industrial city in China, streets lined with lifeless buildings and streets choked with beaten up cars and motorbikes. There’s no future in Datong, and the exhausted inhabitants know it. But on the other side there’s their dreams of escaping to the good life, communicated to them through the Western music and movies they idolize. Though the news is filled with reports of potential American espionage and sabotage, the kids fantasize of Quentin Tarantino movies.

It’s the seeking of this dream-world that dominates the lives of the three main characters: Bin Bin (Zhao Weiwei) and Xiao Ji (Wu Qiong), two lethargic, unemployed wannabe criminals and Xiao Ji’s lover Qiao Qiao (Zhao Tao), the singer with the butterfly tattoo whose boyfriend is a big-shot in the local crime syndicate. The film has little in the way of plot, instead watching as the three wander their way through the deteriorating industrial landscape of Datong, fantasizing about escaping to Beijing or America. (Some critics complained about the film’s lack of focus, but that struck me as disingenuous seeing how critics fawn over European filmmakers like Michelangelo Antonioni and Chantal Akerman who similarly mimic the listlessness of their characters through deliberately decentralized narratives.) Zhangke’s micro-vignettes about early twenty-first century China’s cultural impotence on the world stage—an opera singer who only knows one line from one song but sings it repeatedly, a bank’s inability to convert an American dollar bill to Yuan—are reminders of how far the country has come as a developing superpower. But they leave us suspicious of whether its people have escaped their cocoons of industrialist stupor.
Posted by Steve Kopian at May 08, 2020