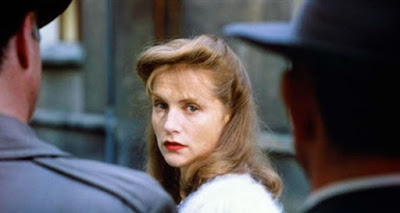 There’s little question that the historical Marie-Louise Giraud, an underground abortionist operating in Nazi occupied France executed by the Germans in 1943, was a martyr. The question Claude Chabrol’s 1988 historical drama Story of Women asks, however, is for what cause. Women’s rights? Probably not. Marie (Isabelle Huppert) seems little interested in helping her fellow women out of principle. Instead, she treats her underground activities as a nascent capitalist venture, even dismissing the death of one of her clients the way a coal baron might reports of cave-in fatalities. She rationalizes her mercenary actions as supporting her children, as indeed any impoverished mother reduced to scrounging the countryside for edible nettles would. But after her “business” makes enough money to reliably stuff her children with jam crackers, to finance a move to a better apartment, to afford a lover, and to hire a full-time nanny/part-time abortionist assistant so she can spend her days dancing and having singing lessons, we start to suspect that this was always about her wants and desires first and foremost.

This isn’t a critique and it’s certainly not a moral condemnation; it’s an observation of Chabrol’s depiction of Marie’s plight to obtain wealth and social position while under foreign occupation. So what then is Marie a martyr for? For that one must look to the opening scene: after Marie feeds her children scavenged food, she puts them to bed, chastises her son for wanting more attention, says that “she’s too young to not have fun,” and goes out drinking and dancing with her friends. Marie, then, is a martyr for a woman’s right to put aside their duty as mother, wife, and daughter and live selfishly for themselves, even in the midst of hardship. It’s a personal autonomy many women are cheated of through social custom and biological necessity. Consider one of Marie’s clients, an exhausted mother pregnant with her seventh consecutive child. She confesses that she hates her children and being forced to be bloated and sick nine months of every year. Indeed, she says that she’d rather die than have another. So Marie lives the good life so many other women can’t, spurning her shellshocked POW husband and making her children play in the street while she performs abortions and rents her rooms to prostitutes. For even during wartime, Chabrol argues, women have a right to live for themselves.
Posted by Steve Kopian at May 08, 2020